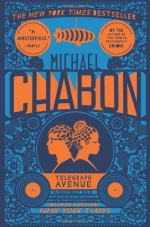 Telegraph Avenue by Michael Chabon is set in modern times on Telegraph Avenue in Oakland, California. The novel explores the lives of six people who are all interconnected by familial connections, place and time. The novel begins with two scenes that set the tone of the book. The first scene is that of an African-American boy on a bicycle with a white Jewish boy who is standing on a skateboard and has his hand on the rider's shoulder. There is a scene set in 1973 of two men in a Toronado, Luther Stallings and Chandler Flowers, both Black Panthers. Flowers shoots a man at the Bit O' Honey lounge, and Stallings is the getaway driver. Both of these scenes haunt the novel as it moves forward in time.

The novel opens when Gwen Shanks, Archy Stallings's wife, is 36-weeks pregnant. The novel elapses one week in time. Archy and his business partner, Nat Jaffe, are worried about their nostalgic record store in downtown Oakland, because Gibson Goode an ex-professional football player for the Steelers and the fifth richest black person, is going to built a Dogtown Thang just blocks from Brokeland Records. The Dogtown Thang will be a multi-plex movie theater, food court and media store, including a Beats department with a large collection of records. The small businesses along Telegraph Avenue are trying to fight the gentrfication to preserve the character of the neighborhood.

City Councilman Chan Flowers has forsaken his violent past as a Black Panther and hopes that all has been forgotten. But when Luther Stallings, Archy's father, blackmails Flowers into giving him money to make a modern blaxploitaition film of the 70's, Archy is regrettably involved. Though Councilman Flowers supports Gibson Goode and has approved of the building of the Dogtown Thang, he now has to reconsider with the blackmailing and the involvement of two people who know of the murder committed in the 70's.

Meanwhile, Archy is caught cheating on his wife. Also a son that he never knew he had, shows up in his life, Titus Joyner. His father-figure, Cochise Jones, is killed moving an organ for a gig they were performing. The novel's tension is heightened by both the situation with Luther Stallings and Chan Flowers and the days leading up to the funeral.

Gwen and Aviva, Nat's wife, run the Berkley Birth Partners practice. At a home birth the woman fails to delier the placenta and the woman is rushed to the hosptial. At the hosptial the doctor dismisses the midwives and Gwen fights back. The doctor files a complaint against them and their hospital privileges are in jeopardy. The husband of the woman also threatens to sue them.

Julie, Nat and Aviva's son, has become good friends with Titus Joyner, but his love and physical desires for Titus complicate things. Julie has discovered that he is gay and although the boys explore sexual interactions together, Titus continually reminds him that he is not gay, although Julie is. Both boys, at 14, are lost and trying to claw there way out of boyhood.

Although this novel is full of serious issues, danger, and conflict, it ends in a way similar to a Shakespearian comedy with a happy ending and everyone making up, and moving on with their lives happily.