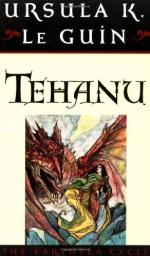 Plot Summary
+Chapters Summary and Analysis
A Bad Thing and Going to the Falcon's Nest
Ogion and Kalessin
Bettering and Worsening
Mice and Hawks
Finding Words and The Dolphin
Home and Winter
The Master and Tehanu
Free Quiz
Characters
Objects/Places
Themes
Style
Quotes
Topics for Discussion
Order our Tehanu: The Last Book of Earthsea Study Guide

Ursula K. Le Guin
This Study Guide consists of approximately 24 pages of chapter summaries, quotes, character analysis, themes, and more - everything you need to sharpen your knowledge of Tehanu.

This detailed literature summary also contains Topics for Discussion and a Free Quiz on Tehanu: The Last Book of Earthsea by Ursula K. Le Guin.

Tehanu is a novel by the award-winning science fiction writer Ursula K. Le Guin. This novel, the fourth in the Earthsea Cycle, finds Tenar, the young priestess from The Tombs of Atuan, as a recently widowed adult. Tenar adopts a young girl who was burned by tramps. Shortly after taking custody of the young girl, Tenar is called to Ogion's bedside where she watches over her beloved guardian until his death. Not long after this, Ged, the Archmage of Roke, arrives, sick and depressed. Tenar cares for him but is forced to send him away when the new king's men come searching for him. Tehanu is a novel that wraps up some of the loose ends from the other novels in this series and revisits beloved characters, bringing them together in a way that will please long time readers.

Tenar is called to the home of a friend after a child was found raped, beaten, and burned. Tenar cannot heal the child but she offers a home in which the child can live. Shortly after adopting the small child, Tenar gets news that Ogion, her former teacher, is dying and requests her presence. Tenar and Therru make the walk to Ogion's home, caring for him in the final days of his life. In fact, Tenar Ogion says his true name moments before his death.

A few days later, Tenar is sitting on a ledge overlooking the valley and she sees a dragon coming toward her. The dragon brings with it Ged, the Archmage of Roke. Ged is desperately ill and Tenar cares for him. When Ged begins to recover, he reveals to Tenar that he lost his power in his quest to help bring the new king to Havnor. After a few weeks, a group of men come from Havnor to look for Ged. The new king wants Ged to present his crown to him at his coronation. However, Ged is embarrassed by his lack of powers and does not want to face these people. Tenar sends Ged to her farm in the Middle Valley and tells the kings men that Ged is not available to them. A short time later, Tenar has a run in with Aspen, the mage living at the home of the Lord of Re Albi. Aspen curses Tenar, forcing her to leave the Overfell.

At Gont Port, Tenar sees one of the men who harmed Therru, causing her to seek refuge aboard a ship that has just arrived from Havnor. This ship carries the king as he continues the quest to find Ged. Therru tells him the truth about Ged's depression and the king vows to leave Ged alone as he wishes. The king then transports Therru and Tenar to the coastal city near Tenar's farm. Back home, Tenar learns that Ged has been in the mountains herding goats, but that he is expected to return when winter begins.

One night in early winter, Tenar hears men attempting to break into her house. Tenar is able to hold them off for a short time. Finally, Tenar opens the door to confront the men, only to discover that Ged has followed them out of the mountains and injured one of the men with a pitchfork. This has caused the other men to run away. The following day, they learn the men were wanted for killing a woman who lived among them. The three men are arrested and later executed for their crimes.

Tenar and Ged become lovers and settle down to life on the farm. However, Tenar's son returns to claim the farm as his own. About that same time, Tenar gets word that Moss, the witch on the Overfell, is ill and asking for her. Tenar, Ged, and Therru return to the Overfell where the curse that was placed on Tenar takes affect once more. Both Tenar and Ged find themselves under Aspen's control. Therru manages to escape and she calls to the dragons. A dragon appears just in time to save Tenar and Ged. It is then that they learn that Therru is a dragon in human form.

More summaries and resources for teaching or studying Tehanu: The Last Book of Earthsea.