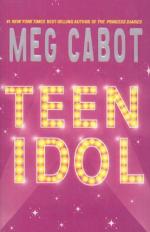 Meg Cabot
This Study Guide consists of approximately 30 pages of chapter summaries, quotes, character analysis, themes, and more - everything you need to sharpen your knowledge of Teen Idol.

"And even though it was a little bit like Scott's head had been transplanted onto the body of one of Mrs. Mulvaney's Greek god statues or something, because he was like three feet taller and had turned totally buff since he was, you know, ten, I could tell he was still the same Scott" (Chapter 1, p. 11).

"Another reason for the anonymity of Annie is that she is privy to a lot of people's deepest, darkest secrets" (Chapter 2, p. 22).

"His posture and gait were indiscernible from those of Kurt Schraeder and his friends, when they came strolling in a few seconds later, just before the third and final bell" (Chapter 4, p. 56).

"It was kind of weird to think about - you know, your life from somebody else's perspective" (Chapter 6, p. 87).

"Why would he have asked...

More summaries and resources for teaching or studying Teen Idol.