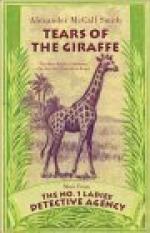 Alexander McCall Smith
This Study Guide consists of approximately 25 pages of chapter summaries, quotes, character analysis, themes, and more - everything you need to sharpen your knowledge of Tears of the Giraffe.

Mma Potokwane tells Mr. J.L.B. Matekoni the story of the two orphans, one of whom is the girl who's wheelchair he fixed. A tribe was in a camp. Among them was a woman who had just given birth to a son, and her daughter. The mother died of a snake bit. The tribe buried her along with the infant son as was the custom, while the girl hid in the bushes. When the tribe left, she rescued her brother and a government truck driver took them to Nyanyabwe Hospital. When they were released from the hospital, they lived in the yard of one of the nurses.

The girl's tuberculosis had damaged her bones and eventually she was unable to walk. When the nurse's husband was transferred, the children were sent to the orphan farm.

As soon as the children...

(read more from the Chapter 8-9 Summary)

More summaries and resources for teaching or studying Tears of the Giraffe.

Tears of the Giraffe from BookRags. (c)2022 BookRags, Inc. All rights reserved.