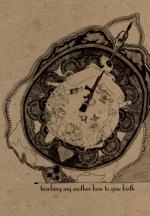 Teaching My Mother How to Give Birth Summary & Study Guide

Warsan Shire
This Study Guide consists of approximately 33 pages of chapter summaries, quotes, character analysis, themes, and more - everything you need to sharpen your knowledge of Teaching My Mother How to Give Birth.

Teaching My Mother How to Give Birth Summary & Study Guide Description

Teaching My Mother How to Give Birth Summary & Study Guide includes comprehensive information and analysis to help you understand the book. This study guide contains the following sections:

This detailed literature summary also contains Quotes and a Free Quiz on Teaching My Mother How to Give Birth by Warsan Shire.

The following version of this book was used to create this guide: Shire, Warsan. Teaching My Mother How to Give Birth. Mouthmark Series, by Flipped Eye Publishing, 2011.

Teaching My Mother How to Give Birth opens with an italicized line on an otherwise blank page: "I have my mother's mouth and my father's eyes; on my face they are still together" (6). This line introduces the themes of broken relationships, the effect of a child's parents, and the power of physical appearances. This is a brief introduction to the rest of the work, and it serves to ease the reader in to the following poems. The first poem is "What Your Mother Told You After Your Father Left," a short piece about a woman who put her faith in God to keep her lover with her, but who was ultimately abandoned. This furthers the theme of broken relationships, and also orients the book from a female perspective.

These themes continue to develop as the book progresses. "Your Mother's First Kiss" follows a mother whose first sexual experience was nonconsensual, but resulted in her having the man's child. She learns that the man goes on to rape women during the war, introducing the topic of war and violence against women. The theme of girlhood progresses in the next poem, "Things We Had Lost in the Summer," which describes a reunion between cousins who were separated for years, and the way they changed. Performing femininity is explored again in "Maymuun's Mouth," which also features the first references to displacement and immigration.

One of the few poems that depicts relationships in a purely positive light is "Grandfather's Hands," which provides a moment of warmth and light in its descriptions of a couple's long and tender history together. The following poem returns to the themes of performing femininity and the complexities of physical appearance; the speaker in "Bone" finds a girl with bulimia living in her home, and grows resentful when her caretaker worries over this new girl, and fails to make the same efforts for her. "Snow" offers another small, tender moment, in which a couple spends their wedding night together in joy and wonder.

"Birds" describes a woman's successful attempt to trick her new husband into believing she is a virgin on their wedding night by using pigeon's blood to stain their sheets. Her husband and his mother's joy at her apparent chastity present a glimpse into a world where a woman's virginity is still a large measure of her worth. This is furthered investigated with the following poem, "Beauty," in which the speaker's sister is shunned by her family for being sexually active. These two poems work together to show the way women's bodies are still controlled, and the different ways women adapt to these cultural rules.

"The Kitchen" returns to the theme of betrayal and fractured relationships, using a series of couplets to alternate between listing foods found in the speaker's kitchen and telling the story of her husband's recent infidelity. This theme continues in the next poem, "Fire," in which a man is kicked out of his home after hitting his wife. Her mother scolds her for doing so, telling her that as long as a man is faithful and takes care of his family a woman cannot complain. The man remembers a funeral he went to as a boy, where a woman had killed herself and her husband after finding out he was unfaithful. Broken relationships continue in the next two poems, "When We Last Saw Your Father," and "When You Were Conceived," which feature a father who abandons his lover and child, and a husband who dies immediately after his wedding, respectively.

The last third of the book deals less with relationships and womanhood, and more with displacement and the legacy of war and upheaval. "Conversations About Home" focuses on refugees, displacement, immigration, and the traumas of war and political upheaval. This poem is a series of prose fragments, which elucidate the fact that "no one leaves home unless home is the mouth of a shark" (24). This continues in "Old Spice," in which a dying grandfather yearns to return to Somalia one last time, but his grandchild knows he would barely recognize it after all of the changes. "My Foreign Wife is Dying and Does Not Want to Be Touched" and "Ugly" both examine the impact of war and trauma on the body, and the negative and positive impacts it can have. The final poem in the book, "In Love and In War," unites both the themes related to relationships and to war, by stating that the arrival of men, whether out of love or because of war, is dangerous for women.

More summaries and resources for teaching or studying Teaching My Mother How to Give Birth.

Teaching My Mother How to Give Birth from BookRags. (c)2022 BookRags, Inc. All rights reserved.