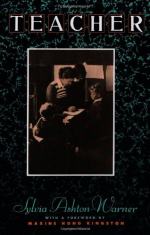 Sylvia Ashton-Warner
This Study Guide consists of approximately 25 pages of chapter summaries, quotes, character analysis, themes, and more - everything you need to sharpen your knowledge of Teacher.

This detailed literature summary also contains Topics for Discussion and a Free Quiz on Teacher by Sylvia Ashton-Warner.

In "Teacher," Sylvia Ashton-Warner recounts some of her years as a teacher of Maori children in New Zealand. The years of her teaching career that are covered in this autobiographical account take place at Fernhill School in Omahu, New Zealand, where her husband Keith Henderson serves as headmaster at the same time. Through her many years of experience in teaching Maori children, especially The Little Ones,who are the five-year-olds in the classrooms known as the Infant Rooms, Sylvia learns that the children benefit most from a teaching approach she terms as organic teaching.

Sylvia becomes a strong advocate of the organic method of teaching which allows the inner vision of the child to emerge and flourish by basing learning techniques on the child's strengths and on the words and terms which are most familiar to him because they originate from his own culture. Sylvia grows to realize that the most effective way to teach the children to learn to read and write English, a language with which these children are only vaguely familiar, is to allow them to take the lead.

Sylvia basically abandons most preconceived notions about teaching children to read. Daily, the youngsters are allowed to select their own words of the day. There are virtually no restrictions in the daily word a child may select—be it "kill" or "ghost" or "kiss." Sylvia writes the selected word on a cardboard and returns it to the child—thereby underscoring the fact that it is his word, his possession. The selected word is used all day in reading, writing and story telling. The child generally does not forget the word as it has intense and personal meaning to him. The day-long repetition of the child's own word serves to solidify it in the child's mind. If one of these "one-worders" is not recognizable to the child the next day, it is abandoned since it did not serve its purpose. Sylvia's organic method of teaching prove to be successful and her handwritten primers, called Maori Transitional Primers, are adopted by the school to bridge the gap between the Maori culture and the reading of English and American primers required by the New Zealand school system.

Sylvia has more to deal with in her classroom than teaching. There is blatant racism between the white and Maori students. Maoris students are often wrongly accused of stealing from the white children. There are physical fights between the children with young Maori boys often displaying very violent tendencies. Sylvia must deal with criticism from her peers, as well, as her approach is not advocated by other educators who do not agree with her innovative methods.

What comes through most clearly and consistently is Sylvia's dedication and emotional attachment to her Maori students and how she is unwavering in her support of them and of allowing them to be themselves. Sylvia remains adamant that she has discovered the teaching method that is most effective for Maori children.

More summaries and resources for teaching or studying Teacher.