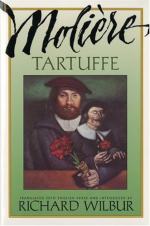 Molière
This Study Guide consists of approximately 84 pages of chapter summaries, quotes, character analysis, themes, and more - everything you need to sharpen your knowledge of Tartuffe.

This detailed literature summary also contains Bibliography and a Free Quiz on Tartuffe by Molière.

Molière's play Tartuffe (also sometimes referred to as Tartuffe, or, The Imposter) is a masterwork by France's most celebrated comic playwright. Tartuffe is set in the realm of seventeenth-century Parisian high society during the reign of King Louis XIV.

In Tartuffe, Orgon, a wealthy family man, takes in a stranger by the name of Tartuffe to stay in his home. Tartuffe appears to be an extremely pious and devout man of religion, and Orgon regards him almost as a saint. Orgon offers Tartuffe his best food and drink and places the needs of his guest above those of his wife and children. He plans to force his daughter to marry Tartuffe and to disinherit his son in order to make Tartuffe the sole heir to his fortune. All of Orgon's friends and family regard Tartuffe as a con man who only pretends to be of the highest moral authority but who does not practice what he preaches. Orgon is warned that Tartuffe may be deceiving him in order to gain both financially and socially, but Orgon is blind to these warnings. Orgon finally learns that he has been betrayed by his guest when he overhears Tartuffe trying to seduce his wife. However, when he orders Tartuffe to leave his house, Tartuffe seeks revenge by trying to seize all of Orgon's property and to have Orgon arrested. In the end, through the intervention of the King, Tartuffe is arrested, and harmony is restored to Orgon's household.

The character of Tartuffe represents those members of society who preach religious piety but do not themselves live by the morals they try to force upon others. Because the play focuses on the issue of religious hypocrisy, it was highly controversial at the time it was written and was banned from public performance for five years.

A translation of Tartuffe in verse form by Donald F. Frame is published by Signet Classic in Tartuffe and Other Plays by Molière (1967).

More summaries and resources for teaching or studying Tartuffe.

Tartuffe from Gale. ©2005-2006 Thomson Gale, a part of the Thomson Corporation. All rights reserved.