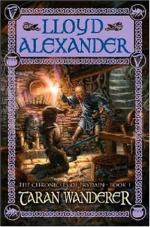 Lloyd Alexander
This Study Guide consists of approximately 36 pages of chapter summaries, quotes, character analysis, themes, and more - everything you need to sharpen your knowledge of Taran Wanderer.

This detailed literature summary also contains Topics for Discussion and a Free Quiz on Taran Wanderer by Lloyd Alexander.

Taran Wanderer by Lloyd Alexander is the fourth installment in a series of books about the fairytale land of Prydain. Taran is an assistant pig-keeper who is in love with a princess. For this reason, Taran would like to find the parents who abandoned him as a child in order to learn if he is of noble birth in order to make him worthy to marry his love. However, Taran's adventure takes him in unexpected directions, causing him to learn more about himself than his parents ever could have done. Taran Wanderer is a touching novel of self-discovery that will entertain and enlighten readers of all ages.

Despite being happy living in Caer Dallben, Taran decides he would like to learn who his parents are. Dallben gives Taran permission to go on this quest, but does not give him any help. Taran's first stop is the home of three women who have powers of enchantment and who he feels might be able to help him. However, Taran has nothing to give them in exchange for the information so they send him away, suggesting he might find what he is looking for in the Mirror of Llunet.

Taran and his friend Gurgi travel deeper into the hill cantrevs where their horses are stolen and they meet with a kindly farmer and his wife who give them a meal and a warm place to sleep. The next day they go in search of their animals and meet a lord who is more convinced in his own heroics than those around him. The lord believes that his men, who stole Taran and Gurgi's horses, stole them from giants and refuses to believe Taran's version of the story, until Taran proves his horse is his own by mounting the horse without the violence the lord had experienced in his own attempts. After taking their animals back, Taran and Gurgi meet another lord who believes more in his generosity than his actions prove. Here, Taran and Gurgi also meet again with an old friend, Fflewddur, who decides to join their adventure.

Taran and his friends continue to the kingdom of their friend, King Smoit. Smoit is a good friend who is very happy to have met with Taran again. During their visit, however, a battle breaks out over a herd of cows between the two lords Taran met the day before. Taran rides with Smoit to stop the battle, and finds himself saving the king when the king falls into a river. Smoit promises Taran he will give him any favor in exchange for his actions. A short time later Taran finds himself asking for this favor when he learns that the two lords have ruined the fields of the kindly farmer he had met a few days earlier. Taran convinces Smoit to force the lords to help the farmer repair his fields instead of imprisoning him in his dungeon. Later, Taran tells Smoit of his quest to find his parents and Smoit offers to take Taran in as his only son and to give him his kingdom upon his death. Taran refuses in hopes of finding his true parents.

As Taran and his friends continue on, they run into a group of swords for hire headed by a man named Dorath. Dorath allows Taran and his friends to share their food, but expects repayment, assuming that Taran's quest will lead to treasure. Taran refuses to allow Dorath to join his adventure; Dorath challenges him to a fight for Taran's sword. Dorath cheats during the fight and wins. Taran leaves in shame, without his sword. As they continue on, Taran and his friends meet up with a sheepherder who tells Taran that he had a son that Dallben took to safety and that he believes Taran to be that son.

Taran feels terribly guilty about the way he felt toward the sheepherder and has realized that he has no right to find out who he really is if he cannot be happy with finding himself to be anything less than of noble birth. Taran travels for a while with Gurgi, attempting to learn many trades but not finding one he enjoys. Finally, when he does find one he enjoys, he discovers he is not good at it. To find out who he really is, Taran continues to the Mirror of Llunet. Taran only gets a glance in the mirror, which is really a tiny pool, when Dorath confronts him. The two men fight and Dorath destroys the pool. Taran survives the encounter and decides to return to Caer Dallben, no longer interested in who his parents are because he feels as though he knows who he is without that knowledge.