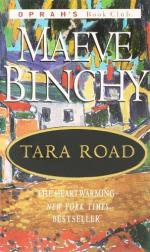 The story begins with the author describing the teenage lives of Ria and Hilary Johnson. Ria is 16; Hilary is the elder sister. The girls also talk about their future plans. Ria wants to travel the world.

Ria gets a job at a real estate firm and one of Ria's co-workers, Rosemary Ryan, becomes a fast friend.

Ria meets a new member of the team, Danny Lynch, who arrives at the real estate office. He is attractive and charismatic and Ria falls for him immediately.

Instantly smitten with Danny and after dating for a time, Ria investigates his temporary home on Tara Road. The house is beautiful but in need of major repair.

"Tara Road was very higgledy-piggledy. Big houses with gardens full of trees, small houses facing right on the street. No. 16 was a great old house, Danny said. Falling down, damp, shabby now. Poor Sean O'Brien's uncle must have been a bit of a no-hoper like Sean himself, it must have been a great house once." Chap. 1, p. 10

Danny tells Ria he dreams of owning the house on Tara Road. He is so enthusiastic that Ria also feels hope for the old house.

Danny and Ria fall in love and the couple becomes inseparable.

Danny tells Ria that their first time at Tara Road is a date to be remembered - December 28, 1982.

The real estate agency struggles to sell a large mansion belonging to mogul Barney McCarthy. The house is not selling and the agency works on various ideas to make the sale. Danny tells Ria on the side that he has a plan to sell the house. He plans to approach McCarthy directly and make suggestions on how to sell the house. Ria is surprised that Danny would undercut his own company. Danny says it is for their future. If his plan is successful, they will have enough money to buy the house on Tara Road.

The story moves quickly from this point on. Ria becomes pregnant and she and Danny marry. Ria throws herself into remodeling 16 Tara Road and making it into a home. Meanwhile, Danny works hard and spends a great deal of time with Barney McCarthy and his mistress Polly. Ria feels guilty about the affair because she likes Barney's wife Mona as well as Polly, who is also her employer.

Danny and Ria have two children, Annie and Brian. When Ria proposes having a third child, Danny confesses that he is with a 22 year old woman who is pregnant. Danny wants a divorce. Ria falls apart.

On a whim, Ria decides to exchange houses with an American named Marilyn Vine. The new situation helps each woman come to terms with her own life as well as her future.