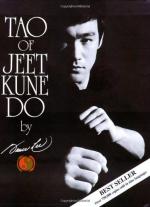 Bruce Lee
This Study Guide consists of approximately 40 pages of chapter summaries, quotes, character analysis, themes, and more - everything you need to sharpen your knowledge of Tao of Jeet Kune Do.

Tao of Jeet Kune Do Summary & Study Guide includes comprehensive information and analysis to help you understand the book. This study guide contains the following sections:

This detailed literature summary also contains Topics for Discussion and a Free Quiz on Tao of Jeet Kune Do by Bruce Lee.

This 208 page manual, published in 1975 after the author's death, presents Bruce Lee's notes, writings, and sketches that he recorded over nineteen years of martial arts study and practice. He begins this book project in 1970, when confined to bed for six months. Lee gets a back injury for which his doctors forbid martial arts practice during recuperation. During this time, he reflects on his life and writes the Tao to record his way of thinking as a guide for readers interested in martial arts. Bruce Lee's expressed intent for the work is not as an instruction manual or how-to guide. However, since the book is published after his death from notes and sketches compiled by his widow and an editor, it is an extensive study in the practice of Jeet Kune Do. The editor hopes the book is a source of ideas for all martial artists to develop without boundaries. Linda Lee hopes reading the book will help the reader come to know her husband and himself better.

The introduction and early sections of the book and the last two sections do present some philosophical ideas recommended by Lee for the mental preparation to become a skilled martial artist. The majority of the book's content, however, details preparation, exercises, movements, and practice required for initially developing the skills of a Jeet Kune Do martial artist. Enlightenment, karma, and Buddhism's eight-fold path introduce Bruce Lee's fundamental notion that false ideas of a separate self must be eliminated. He claims self-consciousness is the greatest barrier to proper physical action.

Jeet Kune Do is the method of martial arts that Bruce Lee promotes in this book. The way, or Tao, requires that one discard all ideals, patterns, styles, and ideas to understand it. The Tao's formlessness lets one assume all forms in mastering his will. The absence of stereotyped technique and thought combines with non-attachment as its doctrine. One can partake in man's pure-heartedness and empty-mindedness by using the tools of Jeet Kune Do. These natural weapons have the purpose to destroy an opponent and one's own instinct of self-preservation. Bruce Lee claims that punches and kicks kill the ego.

The training of a Jeet Kune Do martial artist requires development of the human spirit and the individual's emotions as well as the development of skill. Eleven steps are recommended in Lee's fitness program, and opportunities to exercise should be taken whenever possible. Several qualities ought to be developed by the athlete, including coordination, precision, balance, power, and endurance. The tools of Jeet Kune Do are the fighter's natural weapons of punches and kicks. They are presented in variations and combinations. Preparation and use of strategic moves like feints and parries in fighting are discussed. The ability to be mobile in one's footwork is presented at length, since Bruce Lee claims combat is a matter of motion in Jeet Kune Do. The author brings these elements back together in the Tao's section on attack. Final sections echo earlier themes. His style of short phrases and concise sayings fit the Jeet Kune Do principle of simplicity.

More summaries and resources for teaching or studying Tao of Jeet Kune Do.

Tao of Jeet Kune Do from BookRags. (c)2022 BookRags, Inc. All rights reserved.