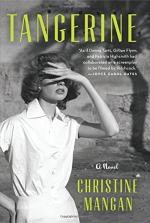 Christine Mangan
This Study Guide consists of approximately 53 pages of chapter summaries, quotes, character analysis, themes, and more - everything you need to sharpen your knowledge of Tangerine.

This detailed literature summary also contains Quotes and a Free Quiz on Tangerine: A Novel by Christine Mangan.

Tangier, 1956. Alice Shipley was once again unable to bring herself to face the market crowds. She and her husband John McAllister, an English bureaucrat and family friend, had moved to Morocco a year ago with dreams of exotic climes that would finally allow Alice to put the past behind her. Yet Alice remained shut up in the apartment, a prisoner of the anxiety that had plagued her since her parents’ deaths in a fire, while John gallivanted about the city spending the allowance from her inheritance.

As Lucy stepped off the ferry and ignored the persistent local guide who followed her offering his help, she felt a thrill that she would soon be back with her old college roommate Alice. But when she arrived at her friend’s door, Alice was nervous and thin. Alice was seemingly shocked by Lucy’s reappearance in her life. Over drinks, John took passive aggressive jabs at Alice. Lucy thought he was the reason for her friend’s unhappiness. That night they went to Dean’s jazz bar, a popular expat and local hangout. Lucy spotted John flirting familiarly with an attractive woman, and suspected an affair. Meanwhile, Alice was still attempting to reconcile her friend’s unexpected appearance with the last drama of their separation a year ago, when she had screamed that she never wanted to see Lucy again. When she had first met Lucy, she had been entranced by the scholarship student’s glamor and seeming worldliness, and after she had learned that she was a fellow orphan, the two had been inseparable for their four years at Bennington College in Vermont.

The next day, Lucy began exploring Tangier, haggling at market stalls and enjoying the heat. She was sitting at a café when the guide from the day before introduced himself. He told her that his name was Joseph and, on a whim, she said she was Alice. When she returned to the apartment that evening and told Alice about her encounter, Alice told her that she knew him as Youssef, and that he was notorious for scamming tourists. Yet when Lucy met him again several days later, she went with him to the beach, where they had mint tea at artist-frequented Café Hafa. She showed him a photo of John and asked if he knew whether he was having an affair with a local woman. He reluctantly told her that the girl’s name was Sabine. When Lucy went to investigate, she caught John embracing the teenage prostitute.

Locked in the apartment, Alice contemplated when things had started going wrong with her relationship with Lucy. She had met a young Williams College student named John late one night at a bus stop, and they had quickly fallen for one another as he helped her with her photography projects. Lucy had taken an instant dislike to him and soon started behaving strangely toward Alice, taking things from Alice’s side of the room, even her mother’s charm bracelet, which she claimed had belonged to her own dead mother. Her behavior had begun to disturb Alice, but it wasn’t until she took a solo trip to New York that she realized the extent of Lucy’s jealousy. When she developed the photos she had taken on the trip, she found Lucy appeared in almost every one of them. That night, she accused her of stalking her and demanded she never speak to her again. Tom picked her up, but as they drove away, he shouted that the brakes were not working. When she woke bloody and bruised in the hospital, she learned he had died in the crash. Lucy was nowhere to be found.

Lucy and Alice decided to take a trip to the nearby town of Chefchaouen, where they spent a delightful day exploring and eating couscous and tagine. That night, Lucy woke Alice, told her of John’s affair, and asked if she would leave Tangier with her. Alice tearfully agreed, and Lucy kissed her for the first time. But when Lucy suddenly confessed to cutting the brakes, Alice felt horror course through her. When they returned to Tangier, John took them to smoke hashish. The atmosphere around them was charged, as Morocco had just achieved independence from France. Afterward, at a jazz bar, John asked if Lucy was going to leave soon. When Lucy said she would stay as long as she liked, Alice said she wanted her to leave. Lucy felt betrayed, and decided her only choice was to eliminate the final obstacle. She asked John to come with her for a walk by the ocean. When he said that there was no way he would let Alice leave, she hit him on the head with a rock, killing him and pushing him into the sea.

Alice was not surprised when John did not appear the next day, as she thought he was in Fez with a friend, and she was relieved that Lucy seemed to have left. However, when a colleague of John’s asked after him the next day, implying that he seemed to be missing, Alice began to worry. When Lucy reappeared, telling her she would not leave again, Alice locked herself in her room and called her Aunt Maude, her guardian following her parents’ death. But when Aunt Maude came to help, Lucy had already gotten to her, having lied about her identity. Lucy had met Youssef the previous day, and he had told her that he had seen her kill John. However, she knew he thought she was Alice, and she decided her only choice was to frame the woman she had once loved. Lucy convinced Maude that Alice was losing her mind and possibly responsible for John’s death, and the police soon believed the same thing after Youssef told them what he knew. Caught in Lucy’s web of lies, Alice could do nothing to defend herself and dissolved into a state of manic anxiety.

Maude committed Alice to a hospital in Spain, where she appointed Lucy as her caretaker. When Alice turned 21, the age when she could access her full inheritance, Lucy stole her identity and withdrew all of Alice’s money.

More summaries and resources for teaching or studying Tangerine: A Novel.