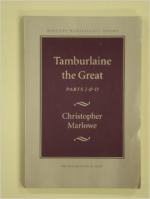 Introduction & Overview of Tamburlaine the Great

This detailed literature summary also contains Bibliography and a Free Quiz on Tamburlaine the Great by Christopher Marlowe.

In 1587, Christopher Marlowe, William Shakespeare's contemporary and one of the star playwrights of the English Renaissance, produced a daring and thrilling play focusing on the triumphs of a Tartar conqueror. Famous for adeptly incorporating the style of blank verse (unrhymed iambic pentameter) into English drama, the play was so popular that Marlowe was compelled to write a sequel including Tamburlaine's and his wife's deaths. Together, the plays became known as Tamburlaine the Great. Poetically captivating, as forceful and powerful as Tamburlaine the character, Marlowe's verse in these works marks a major shift from the conventional, low comic style of other Renaissance works. The plays are not a straightforward glorification of Tamburlaine's violent conquests, since Marlowe frequently highlights his protagonist's excessive brutality and hubris, or excessive pride. However, their directness and eloquence make it difficult not to admire Tamburlaine, both for his rhetorical power and his lifelike animation.

Alongside Tamburlaine's ceaseless conquests and their implications about war and politics run more general themes of desire, ambition, and power. Marlowe uses his portrayal of Tamburlaine's capture, betrothal, marriage, and ultimate loss of his wife Zenocrate, the daughter of the Egyptian "soldan," or sultan, to highlight these themes in another context, questioning the true nature of his hero's romantic passion. The plays also comment on ideas of fatherhood and masculinity by way of Tamburlaine's expectations of his sons, including his cruel treatment and murder of his son Calyphas, whom he considers a coward. Marlowe develops all of these themes through his skillful and unique use of language, which is why he is considered perhaps the most important stylistic innovator of the period. Originally published in 1590, the plays are now available in modern editions with notes and introductory material, such as the New Mermaid edition, Tamburlaine the Great: Parts I and II, published by Ernest Benn Limited in 1971.