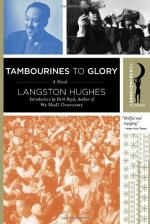 Books Like Tambourines to Glory by Langston Hughes | Suggested Reading

Langston Hughes
This Study Guide consists of approximately 71 pages of chapter summaries, quotes, character analysis, themes, and more - everything you need to sharpen your knowledge of Tambourines to Glory.

The first volume of Hughes's autobiography, The Big Sea (1940), covers approximately the first thirty years of his life, including his early encounters with salvation and African American churches.

Hughes is best known as a poet, and The Collected Poems of Langston Hughes (1994), running more than seven hundred pages, shows the depth and range of his poetic talents. The poem "Tambourines" is similar to the song Essie sings at the end of the novel.

Tambourines to Glory has sometimes been compared to Elmer Gantry (1927), a novel by Sinclair Lewis about a phony preacher who comes to lead a large church in the Midwest. The tone of Lewis's novel is somber and judgmental, without Hughes's humor and musicality.

One Way to Heaven (1931), by Countee Cullen, another novel about life in Harlem, examines the tensions between lower-class and middle-class African American society.

More summaries and resources for teaching or studying Tambourines to Glory.

Tambourines to Glory from Gale. ©2005-2006 Thomson Gale, a part of the Thomson Corporation. All rights reserved.