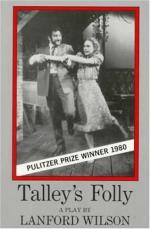 Lanford Wilson
This Study Guide consists of approximately 48 pages of chapter summaries, quotes, character analysis, themes, and more - everything you need to sharpen your knowledge of Talley's Folly.

Research Lithuania, Latvia, Prussia, and the Ukraine, particularly their political status during and just after World War I. Why does Matt, speaking in 1944, feel so bitter about his family's homelands?

Who was Emma Goldman? In what ways would Sally's family think Sally and Emma Goldman are alike?

Matt makes a casual reference to a "Negro private" with whom he played checkers. Trace the history of the word "Negro" through the late nineteenth century and the twentieth century in the United States. What emotional and political weight did the term carry when Matt used it in 1944, and when Lanford Wilson wrote the play in 1979?

How important is religious heritage in the community in which you live? How would parents in your community feel about Sally and Matt, or any other two people of different religions, getting married?

Why does Lanford Wilson set this...

More summaries and resources for teaching or studying Talley's Folly.

Talley's Folly from Gale. ©2005-2006 Thomson Gale, a part of the Thomson Corporation. All rights reserved.