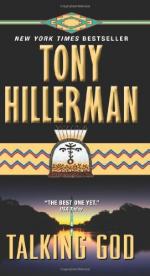 Tony Hillerman
This Study Guide consists of approximately 47 pages of chapter summaries, quotes, character analysis, themes, and more - everything you need to sharpen your knowledge of Talking God.

This detailed literature summary also contains Topics for Discussion and a Free Quiz on Talking God by Tony Hillerman.

Talking God is a gripping mystery by Tony Hillerman, set in the American Southwest and Washington, DC, and involving two of Hillerman's famous detectives, Lieutenant Joe Leaphorn and Office Jim Chee of the Navajo Tribal Police. Leaphorn and Chee each investigate a mystery that leads them to the nation's capitol, where they join forces to uncover a terrorist plot involving Indian artifacts and a priceless golden jewel-encrusted Inca mask. Together, the two heroes defuse a bomb at a crowded Smithsonian exhibit and return the Navajo Yeibichai or Talking God mask to its rightful owners.

Officer Jim Chee attends a Night Chant, or Yeibichai, ceremony in the American Southwest, where he must arrest a white man named Henry Highhawk, a conservator at the Smithsonian. Highhawk has been charged with desecrating graves in New England, in protest of the Smithsonian's policies on keeping Indian skeletons. Chee's friend Janet Pete, who lives in Washington, DC, volunteers to represent Highhawk.

When Janet Pete believes she is being followed, she calls on Jim Chee for help. Chee travels to Washington, DC, where he learns that Highhawk is, for unknown reasons, creating exact replicas of several Indian artifacts, including a Yeibichai mask and a Tano War God fetish. Chee visits Highhawk at the Smithsonian Museum of Natural History one night after hours, where the conservator mysteriously disappears. Chee searches unsuccessfully for him and eventually leaves, noticing that the security guard's desk is also unattended.

Meanwhile, middle-aged Lieutenant Joe Leaphorn of the Navajo Tribal Police is investigating another crime. FBI agent Jay Kennedy asks Leaphorn to help him solve the mystery of the fully dressed body of a man inexplicably left in the middle of the desert. There are no footprints nearby to indicate how the man got there. The man's wallet and dentures are also missing, making identification impossible.

Leaphorn contacts a friend who works for the railroad and learns that an Amtrak passenger train made an emergency stop at exactly that place on the night of the murder. Leaphorn determines that someone killed the man on the train and left his body in the desert. Taking an overdue vacation, Leaphorn travels to Washington, DC to examine the dead man's abandoned luggage for himself. It contains a notebook full of clues and a cryptic list, but no dentures. Even better, the train conductor describes the killer. Leaphorn identifies the dead man as Elogio Santillanes from a prescription number in the notebook. When Leaphorn tries to notify the dead man's family, he sees the killer in an apartment across the hall.

Office Chee and Lieutenant Leaphorn join forces in Washington, DC. Over breakfast, they realize that the two cases must be connected. They go to the Smithsonian and discover the body of Henry Highhawk, who has been murdered. Together, they uncover Henry Highhawk's connection to a plot involving terrorists and the Chilean embassy. They realize at the same instant that the Yeibichai mask in a Smithsonian exhibit is being used to conceal a bomb. Together, they defuse the bomb, saving the lives of everyone in the crowded exhibit hall. During the melee, Office Jim Chee removes two sacred Indian artifacts from the museum and returns them to the tribes.

More summaries and resources for teaching or studying Talking God.