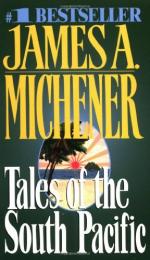 James A. Michener
This Study Guide consists of approximately 54 pages of chapter summaries, quotes, character analysis, themes, and more - everything you need to sharpen your knowledge of Tales of the South Pacific.

Kuralei is a fictional island that is like other islands conquered during the Sea Pacific campaign from the Japanese. It is chosen to cut off Japanese forces from supplies that are further to the south of it.

Konoraappears in The Airstrip at Konora, A Cemetery at Hoga Point

Konora is a very small coral island that is conquered a couple of weeks before the attack on Kuralei. It is just big enough to hold a bomber landing strip, but is near enough to Kuralei to add strength to the attack through an American bomber base.

Bali-ha'i is a low-lying island that is next to the larger and higher island of Vanicoro. Bali-ha'i is a safe haven for the young, unmarried women of the New Hebrides from male soldiers who may assault them. Ironically, this is where...

More summaries and resources for teaching or studying Tales of the South Pacific.

Tales of the South Pacific from BookRags. (c)2022 BookRags, Inc. All rights reserved.