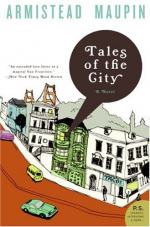 Armistead Maupin
This Study Guide consists of approximately 47 pages of chapter summaries, quotes, character analysis, themes, and more - everything you need to sharpen your knowledge of Tales of the City.

Tales of the City Summary & Study Guide includes comprehensive information and analysis to help you understand the book. This study guide contains the following sections:

This detailed literature summary also contains Topics for Discussion and a Free Quiz on Tales of the City by Armistead Maupin.

This multi-plot narrative follows the complicated lives of a motley group of characters gingerly finding their way through a maze of sex, drugs and longing in 1970's San Francisco. As relationships entwine and sever and as layers of secrets are revealed under other layers of secrets, the narrative explores themes related to human frailty, the nature of family, and the tension between sexual freedom and emotional freedom.

The narrative begins with the decision of the novel's central character, naïve Midwestern secretary Mary Ann Singleton, to make her vacation in San Francisco into a permanent move. After taking temporary refuge with ex-high school friend and sexual free spirit Connie Bradshaw, Mary Ann finds a place of her own - at 28 Barbary Lane, where the landlady is the eccentric, open-minded, and open-hearted Anna Madrigal.

One of Mary Ann's new neighbors, neurotic advertising executive Mona, gets her a job working at her (Mona's) firm, Halcyon Communications, which is run by Edgar Halcyon, whom the narrator reveals is dying of kidney disease. After taking refuge from a stressful day at the office, Edgar takes refuge in a public park, where he meets and begins a romantic affair with Anna Madrigal. Meanwhile, Mary Ann is seduced into an affair with Edgar's no-good son-in-law, Beauchamp (pronounced BEECH-um), who is in turn cheating on his wife (and Edgar's daughter) DeDe with both men and women.

Back at Barbary Lane, Mona's gay, and very romantic, best friend Michael moves in with her and quickly makes friends with Mary Ann, who in turn encounters heterosexual stud (and disillusioned liberal lawyer) Brian, another tenant (who also makes unexpected friends with Michael) and the mysterious, nerdy Norman Neal Williams, who lives in the apartment on the roof.

As Mary Ann creates a new life for herself, as Mona struggles to pay the rent after being fired, as Michael falls in love with an attractive doctor, as Anna and Edgar's affair deepens, and as DeDe struggles to find an identity for herself, the paths of all the characters intersect in increasingly intriguing, often surprising and frequently sexual ways. Mary Ann volunteers at a crisis switchboard, where her fellow volunteer kills himself, leading Mary Ann to seek (non-sexual) comfort in the marijuana-enlightened perspective of Brian. Mona is contacted by a former female lover from New York, who wants to renew their relationship at the same time as conversation with Anna Madrigal reveals surprising truths about the origins of their friendship. Michael's on-again, off-again relationship with the doctor turns out to be more off than on. Edgar learns some secrets from Anna's past, secrets which seem to be at the core of a blackmail attempt by Norman Neal Williams. DeDe becomes pregnant after having an affair with a grocery delivery boy and sleeps with a disgusting gossip columnist in order to keep her secret.

Mary Ann is horrified to discover secret truths about Norman Neal Williams, who in turn discovers truths about Anna Madrigal that Mary Ann takes extreme action to conceal. Michael's efforts to raise some money for himself and Mona end up estranging him even further from his doctor boyfriend. Mona's well meaning attempts to reunite her lover with her parents end up in ways she couldn't possibly have predicted. Brian has a sexual encounter that once and for all proves to him that his sexual appetites are unhealthy. And, on Christmas Eve, just as Anna Madrigal is hosting a party and DeDe is telling him she's going to have a baby, Edgar Halcyon and Norman Neal Williams both die ... one from illness, one as the result of careless drunkenness on a dangerous cliff.

This is the first of several books in a series following the lives of the same characters through several years in the life of 28 Barbary Lane.

More summaries and resources for teaching or studying Tales of the City.

Tales of the City from BookRags. (c)2022 BookRags, Inc. All rights reserved.