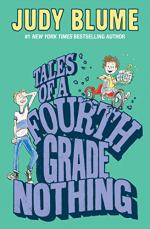 Related Topics
Are You There God? It's Me, Margaret
Forever...
Fudge-a-Mania
Judy Blume
Places I Never Meant to Be: Original Stories by Censored Writers
Summer Sisters
Tiger Eyes
In the Unlikely Event
Superfudge

Tales of a Fourth Grade Nothing Setting

Judy Blume
This Study Guide consists of approximately 39 pages of chapter summaries, quotes, character analysis, themes, and more - everything you need to sharpen your knowledge of Tales of a Fourth Grade Nothing.

The Hatcher apartment is where Peter Hatcher lives with his parents and his younger brother, Fudge. The apartment has three bedrooms, meaning Peter and Fudge each have their own rooms, though they share in special circumstances, such as when they have guests. Peter says they live in an older apartment building but he thinks there are some good features, such as the elevator that has mirrors all around and is operated by a man named Henry who knows everyone in the building. The apartment is the setting for many of the scenes of the novel.

Central Park is the famous park in New York City, which is very near the Hatcher house. Peter spends a lot of his free time here with his friend Jimmy, though they are sometimes interrupted by a girl named Sheila. All three live in the same building. Though the...

More summaries and resources for teaching or studying Tales of a Fourth Grade Nothing.

Tales of a Fourth Grade Nothing from BookRags. (c)2022 BookRags, Inc. All rights reserved.