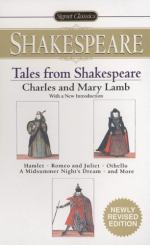 +Chapters Summary and Analysis
The Tempest and A Midsummer Night's Dream
The Winter's Tale and Much Ado About Nothing
As You Like It and The Two Gentlemen of Verona
The Merchant of Venice and Cymbeline
King Lear and Macbeth
All's Well That Ends Well and The Taming of the Shrew
The Comedy of Errors and Measure For Measure
Twelfth Night; or, What You Will and Timon of Athens
Romeo and Juliet and Hamlet, Prince of Denmark
Othello and Pericles, Prince of Tyre
Free Quiz
Characters
Objects/Places
Themes
Style
Quotes
Topics for Discussion
Order our Tales from Shakespeare Study Guide

Charles Lamb
This Study Guide consists of approximately 47 pages of chapter summaries, quotes, character analysis, themes, and more - everything you need to sharpen your knowledge of Tales from Shakespeare.

An Enchanted Islandappears in The Tempest

An Enchanted Wood near Athensappears in A Midsummer Night's Dream

An imaginary wood near Athens where Titania and Oberon, king and queen of the fairies, and their tiny fairy attendants live...

More summaries and resources for teaching or studying Tales from Shakespeare.