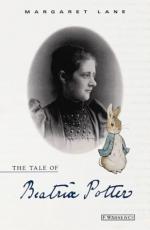 Margaret Lane
This Study Guide consists of approximately 32 pages of chapter summaries, quotes, character analysis, themes, and more - everything you need to sharpen your knowledge of The Tale of Beatrix Potter.

1. To be eccentric means to be unusual or "outside the center of things." In what ways do you think Beatrix Potter was truly an eccentric? In what ways was she not eccentric at all?

2. Potter believed in the importance of heredity in the formation of character, and as she grew older she liked to draw attention to "what she regarded as the outcroppings of native Crompton rock in her own character." How would you describe the influence of her grandparents and the Crompton family legends on Potter's life?

3. Potter once remarked, "I can't invent; I only copy." To what extent is this a true statement? How can one who copies also be creative?

4. A modern reader may be surprised to learn that Potter was outspokenly opposed to women's liberation. Can you explain this stand in terms of her character and upbringing?

More summaries and resources for teaching or studying The Tale of Beatrix Potter.

The Tale of Beatrix Potter from Gale. ©2005-2006 Thomson Gale, a part of the Thomson Corporation. All rights reserved.