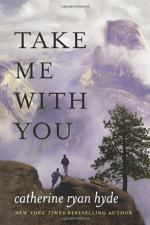 Take Me With You Summary & Study Guide

Take Me With You Summary & Study Guide Description

Take Me With You Summary & Study Guide includes comprehensive information and analysis to help you understand the book. This study guide contains the following sections:

This detailed literature summary also contains Quotes and a Free Quiz on Take Me With You by Catherine Ryan Hyde.

August Schroeder is a high school science teacher who lives in San Diego, California. August is weary of his job and life in general as he comes to grips with the recent death of his 19-year-old son, Philip. Philip died in a car accident when another car ran a red light and hit the passenger side where he was sitting. August's now ex-wife had been driving the car and had been slightly inebriated but was not liable for the accident. Even though the accident is not her fault, August secretly blames her for the tragedy and he stops drinking altogether and attends Alcoholics Anonymous meetings.

August is on a road trip to Yellowstone National Park where he plans to scatter some of his son's ashes because he had planned to make the trip with his son before the tragedy. August's RV breaks down and he is towed by a mechanic named Wes who determines that it will take a couple days to make the repairs. While he waits, August strikes up a tentative friendship with Wes' boys, 12-year-old Seth and 7-year-old Henry. Shortly before it is time for August to leave, Wes asks him if he will take Seth and Henry for the summer because he has to serve a 90-day jail sentence for DUI. August is stunned by the request from a stranger but he softens and agrees to take them so they won't have to go into the county care system.

August and the boys soon develop a relationship of trust as August silently mourns his son and the boys learn what it's like to be around a trustworthy adult. Their trip takes them to several national parks where they camp and Seth develops an interest in hiking and mountain climbing. At the end of the summer, August returns the boys to their home but they are sad because their father is an alcoholic and does not know how to be a real father to them. Wes is also jealous of the relationship that has developed between August, Seth and Henry.

Over the next eight years, August has limited contact with Seth and Henry because they can't risk their father finding them talking to him. One day when Seth is in college, August calls him to tell him that he has muscular dystrophy and can't walk well anymore so he is going to sell the RV. Seth offers to buy it as long as August will let him make small monthly payments. When summer comes around again, August is surprised when Seth and Henry come to San Diego to pick up the RV and announce that they are taking August on a road trip for the entire summer. The boys take care of everything that August needs just like he took care of them their first summer together. When summer ends, August has to return to his teaching job and the boys return to school but they promise to take August on a summer road trip every year from now on.

Take Me With You from BookRags. (c)2022 BookRags, Inc. All rights reserved.