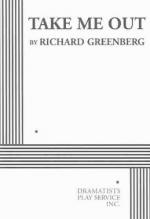 Additional Resources for Take Me Out by Richard Greenberg

Richard Greenberg
This Study Guide consists of approximately 33 pages of chapter summaries, quotes, character analysis, themes, and more - everything you need to sharpen your knowledge of Take Me Out.

Anderson, Eric, In the Game: Gay Athletes and the Cult of Masculinity, State University of New York Press, 2005.

Anderson interviewed gay athletes at all levels of team play, from high school sports to professional teams, in order to document the prevailing attitudes toward homosexuality and how it fits with or clashes with the macho culture of competition.

Morgan, William J., Baseball and the Search for an American Moral Identity, in Baseball and Philosophy: Thinking Outside the Batter's Box, edited by Eric Bronson, Open Court Publishing, 2004, pp. 157-68.

In Take Me Out, the character Mason Marzac learns to appreciate baseball from an intellectual standpoint, while other characters, particularly Kippy and Darren, discuss the moral issues surrounding the game. In this essay, Morgan examines what the game has to say about the American character.

Robinson, Jackie, I Never Had It Made, Harper Perennial, 1972.

This autobiography of the...

More summaries and resources for teaching or studying Take Me Out.

Take Me Out from BookRags. (c)2021 BookRags, Inc. All rights reserved.