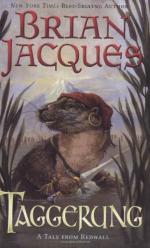 Brian Jacques
This Study Guide consists of approximately 37 pages of chapter summaries, quotes, character analysis, themes, and more - everything you need to sharpen your knowledge of Taggerung.

Taggerung: A Tale from Redwall Summary & Study Guide includes comprehensive information and analysis to help you understand the book. This study guide contains the following sections:

This detailed literature summary also contains Topics for Discussion on Taggerung: A Tale from Redwall by Brian Jacques.

Taggerung is a fictional fantasy story about an otter warrior named Deyna who is taken from his family as a baby and raised by a band of vicious vermin. Brought up to believe he is the legendary Taggerung foretold in the legends of the vermin band, Deyna finds he is increasingly at odds with their brutal actions. He leaves the clan and makes his way to Redwall Abbey where he is reunited with his mother and sister and where he helps the creatures of Redwall defend themselves against the vermin hoard that comes after him.

Taggerung opens in the camp of Sawney Rath, a ferret who is the leader of the Juska clan. Sawney kidnaps the baby otter Deyna, killing his father. Tagg, as the otter comes to be known, becomes one of the most feared creatures in the clan. He is not vicious enough to please Sawney, and when Sawney insists that Tagg kill a runaway fox, Tagg defies him and runs away. He is tracked by a small band of Juska including the slow-witted Gruven, a stoat whose mother wishes to make him the Taggerung.

Meanwhile, the creatures of Redwall Abbey feast peacefully within their high walls. The abbey is led by an aged, blind badger named Cregga who takes the young otter Mhera as a close friend and observes her with the thought of electing Mhera as Abbess. Mhera is in reality the older sister of Tagg, who has been presumed dead.

Moving through the wilderness, Tagg befriend a mouse named Nimbalo. Troubled by dreams that seem to be about his earliest memories of Redwall, Tagg learns about the abbey from Nimbalo and other helpful creatures he meets. He makes his way to the abbey but is captured by some of the Redwall creatures who believe him to be one of the vermin hoard.

Meanwhile the tracking party also arrives at Redwall and demands that they hand over Tagg, whom his mother has realized is her lost son Deyna. Deyna leaves the abbey and with Nimbalo rushes the vermin who have come after him. Gruven runs away in fear, but the two leaders of the party are killed. Deyna and the badger Cregga are badly wounded.

Deyna recovers but Cregga does not. Before she dies, however, she names Mhera to serve as Abbess. Gruven returns to his clan and claims to have killed the Taggerung. He finds the clan has been taken over by a fox named Ruggan Bor who is skeptical of Gruven's claim. Ruggan leads his clan to the walls of Redwall in a challenge, but he is surrounded at the last minute by an army of hares who have come to help defend the abbey. Ruggan retreats and Deyna is given the special sword of Martin the Warrior and named Warrior of Redwall.

More summaries and resources for teaching or studying Taggerung: A Tale from Redwall.

Taggerung: A Tale from Redwall from BookRags. (c)2022 BookRags, Inc. All rights reserved.