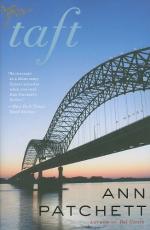 Ann Patchett
This Study Guide consists of approximately 36 pages of chapter summaries, quotes, character analysis, themes, and more - everything you need to sharpen your knowledge of Taft.

This detailed literature summary also contains Topics for Discussion and a Free Quiz on Taft by Ann Patchett.

Taft by Ann Patchett tells the story of two Tennessee fathers: John Nickel and Levon Taft. These fathers are the head of households that are broken by pride, betrayal, and unspoken fears and hopes. The novel shows that beyond race and economic status, all families face the same challenges.

John Nickel is the manager of Muddy's Bar in Memphis. John used to be a popular local blues drummer until his girlfriend, Marion Woodmoore, became pregnant. John initially refused to marry her, but once his son Franklin was born, he became determined to win Marion back. Marion forces him to get a job - namely, bartending at Muddy's - to put her through nursing school. When she gets her degree, however, Marion takes Franklin and moves to Miami.

At the beginning of the novel, John hires a new waitress, Fay Taft, who may be too young. She, her mother and her brother Carl have moved from east Tennessee following her father Levon's death. Carl becomes a fixture at Muddy's, helping out, though he is often high. Fay, meanwhile, gets closer to John, who cannot help but become infatuated with her. One night, John saves Carl from OD'ing, and Fay propositions him.

John begins imagining the man Levon Taft was before his death. He imagines Taft working two jobs to make ends meet and dedicating himself to keeping an eye on his two children, both of whom are wild and impulsive in their own ways. In doing this, Taft overextends himself and develops heart problems which he refuses to get checked.

As John attempts to avoid becoming romantically entangled with Fay, he sleeps with Marion's younger sister Ruth. Around this time, Marion and Franklin return to Memphis for a short vacation. John becomes determined to reconnect with them, and with the help of her parents, he nearly convinces her to return. He also discovers that Carl is dealing drugs and bars him from Muddy's, though later he bails him out of jail. Fay turns eighteen and asks John to marry her, but he refuses even to answer her request.

One night, Carl shoots John in the neck trying to recover drugs John confiscated from him. John does not want the young man to go to prison, so he has Marion arrange a surreptitious visit with a doctor to tend his wound. Marion begins caring for the convalescing John, who decides to forget about Fay and focus on raising his own child.

At the end of the novel, John imagines the day Levon Taft died, and how being in the room with his dying father psychically wounded Carl. Taft kept his children safe, and in his absence, the family disintegrates. John vows not to let that happen to his own.

More summaries and resources for teaching or studying Taft.