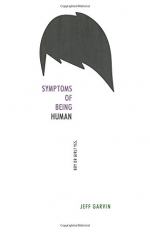 Jeff Garvin
This Study Guide consists of approximately 72 pages of chapter summaries, quotes, character analysis, themes, and more - everything you need to sharpen your knowledge of Symptoms of Being Human.

Symptoms of Being Human Summary & Study Guide includes comprehensive information and analysis to help you understand the book. This study guide contains the following sections:

This detailed literature summary also contains Quotes and a Free Quiz on Symptoms of Being Human by Jeff Garvin.

The following version of this book was used to create this study guide: Garvin, Jeff. The Symptoms of Being Human. Kindle, 2016.

NOTE: With respect to the main character's gender fluidity, this study guide uses "they," "their," and "them" to refer to the singular Riley Cavanaugh.

Being a teen is hard, even under the best of circumstances. As a gender fluid teen, Riley Cavanaugh, the main character and narrator of the novel The Symptoms of Being Human by Jeff Garvin, anticipates rude remarks and stares. Along with the pain of being bullied, Riley spends a good deal of time feeling wrong in their own body. When their psychiatrist suggests that Riley start a blog to help relieve their anxiety and connect with others like them, Riley finds a niche for themself. Through their blog, Riley not only connects with other LGBTQ teens but is also invited to speak on a conference panel to discuss the use of social media as a way to connect members of that community.

When Riley transfers from private Catholic school to a public school, they hope that the students there will be more open minded. Unfortunately, Riley learns that students in public school are just as cruel as their peers in private school. Riley does make a few close friends. Solo is an overweight darker skinned boy who is bullied because of his love of Star Wars and the Chewbacca backpack he once wore. He advises Riley that they need to try to bring less attention to themself. He suggests that it is Riley’s dress and behavior that invites the harassment Riley receives.

Bec, whom Riley thought was a boy at first, connects with Riley because her sister was transgender. Bec takes Riley to a meeting of the Q, a support group for members of the LGBTQ community. Riley finally begins to feel that they have a physical place where they fit in. Riley had already developed an online support group through an anonymous blog they started as part of therapy. Riley discovered the blog was therapeutic and that people connected with Riley's blogs. One transgender girl, Andie Gingham, reached out to Riley because she wanted to kill herself after her parents reacted badly when she came out to them.

Riley’s online identity, Alix, becomes popular after Andie is badly beaten by her father when she returns to her parents. News outlets that carried Andie’s story included Andie’s words of thanks to Alix for encouraging her to keep on living. Even though she was beaten, Alix did not regret having come out as transgender.

When Riley attends her second meeting of the Q, the group leader Mike/Michelle recognizes Riley as the blogger Alix just by the way Riley talks and the way people react to Riley’s words. Mike/Michelle asks Riley to consider being a speaker on a panel to discuss the use of the internet to develop an online LGBTQ community.

Riley’s world falls apart when a student at their school hacks Riley's blog and discovers that Riley is Alix. Reporters are contacted and wait for Riley and their family to leave an important campaign event for Riley’s father, who is running for reelection as a United States congressman. Riley had not yet come out to their parents and is forced to do so in a high tension atmosphere. Riley's father’s reelection campaign is ruined.

Riley leaves their parents’ house the night they come out as gender fluid angry because of their parents’ reaction. Riley is followed by three boys from their school. These boys assault Riley in an attempt to determine if Riley is male or female. Solo and Bec find Riley and stop the attack. Instead of making Riley want to hide, the attack gives Riley the strength needed to come out publicly and participate in the panel.

More summaries and resources for teaching or studying Symptoms of Being Human.

Symptoms of Being Human from BookRags. (c)2022 BookRags, Inc. All rights reserved.