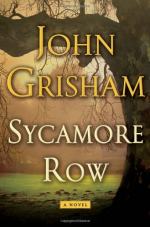 Jake Brigance is a lawyer who works in Clanton, Mississippi. Jake previously won a notorious case in which a black man murdered the two men who raped, beat, and left for dead his nine year old daughter. Jake continues to live in the shadow of that case, both living in fear of the men who burned down his home and in infamy for the publicity that case got him. Jake is handed the Seth Hubbard estate case when Seth sends him his last will. Jake fights to win the case, in part because of the notoriety it could get him and in part because of the request made by Seth in a letter addressed to him. Jake also likes making money for once. In the end, Jake wins his case and then allows it to be settled in light of pending appeals.