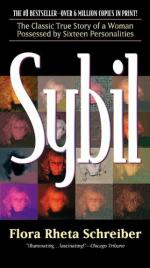 This detailed literature summary also contains Topics for Discussion and a Free Quiz on Sybil by Flora Rheta Schreiber.

Sybil is the true story of Sybil Isabel Dorsett who developed sixteen separate personalities in order to deal with a very traumatic childhood. Sybil's story is one of the most dramatic recorded cases of multiple personalities. Her other selves include some astonishing characters. Ruthie is a toddler who never ages. Vanessa and Marcia emerged at different times but developed a close personal relationship with one another and utilize Sybil's body simultaneously. Mike and Sid are two male selves. Sybil is the only known case, at the time, of a female with male alternate personalities. Even more amazing than the variety of selves created are the reasons that Sybil developed them.

Sybil's parents were in their forties before Sybil was born after a series of miscarriages. Her father, Willard Dorsett, was a well-respected businessman who lived by strong religious principles. Willard's wife, Hattie, was a strong willed woman who demanded a great deal from her daughter and believed in punishment for bad behavior. However, Hattie also suffered from untreated schizophrenia and Willard lived his life in denial. Hattie's mental condition made her subject to periods of wild fancy and extreme depressions. From the moment of Sybil's birth her life was one battle after another. By the age of two Sybil had been fighting against her environment so hard that she had no more energy and began to develop alternate selves to help her.

Hattie Dorsett subjected her daughter to unthinkable torture. She would give her almost daily enemas with cold water and then instruct the girl to hold the water in or risk further punishment. Sybil received numerous broken bones from her mother's angry hands and was constantly belittled despite having a strong creative side. Willard Dorsett worked long hours outside the home and did not see much of what his wife did to his daughter. What Willard did see he refused to acknowledge until many years later.

When Sybil is a young woman attending Columbia University she experiences a time lapse. Five days pass in which she does not know what happens or how she got from New York to Philadelphia. The school nurse recommends that Sybil return home for some rest. However, her home life has never provided comfort and Sybil does not recover. On the recommendation of the family doctor, Sybil meets with Dr Cornelia Wilbur, a psychologist. Sybil immediately likes Dr. Wilbur and is excited to meet someone who does not blame Sybil for the troubles she is experiencing. A relationship is initiated between the two women that will last many years and will serve to uncover all of Sybil's hurt and anxiety. Through her sessions with Dr. Wilbur Sybil comes to recognize and accept her multiple personalities until she is an integrated whole.

Sybil's story is truly amazing. The reader cannot fathom how any human being can survive the amount of abuse that Sybil endures and manage to come out alive. Readers may be tempted to view Dr. Wilbur as a lifesaver, but they should realize that Sybil is responsible for her own transformation. Dr. Wilbur acts as a facilitator as Sybil gathers her own immense strength and integrates her sixteen selves into a functioning and happy seventeenth self.