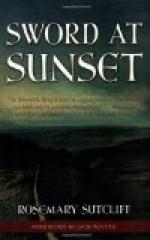 Rosemary Sutcliff
This Study Guide consists of approximately 57 pages of chapter summaries, quotes, character analysis, themes, and more - everything you need to sharpen your knowledge of Sword at Sunset.

The Saxons admit defeat and call for a council of truce and treaty. Artos goes and is surprised to see Cedric still alive, the scar around his neck still healing. The treaty is hammered out and they all agree to allow what is left of the Saxons to live on the shores with their crops and animals, but that in return they will become defenders for Britain on the coast, even against those of their own kind should they return by sea. But, this treaty does not extend to Cedric. Artos cannot forget the heinous acts against the innocent by his hands and the hands of his men. He banishes Cedric from his shores, and gives him nine days to make it happen.

Later, after everyone has eaten and come back to their tents, Artos is visited by Medraut. He is upset...

More summaries and resources for teaching or studying Sword at Sunset.