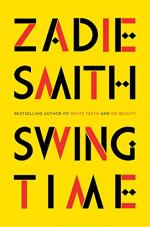 Zadie Smith
This Study Guide consists of approximately 57 pages of chapter summaries, quotes, character analysis, themes, and more - everything you need to sharpen your knowledge of Swing Time.

The following version of the book was used to make this Study Guide: Smith, Zadie. Swing Time. Penguin Press, 2016.

Swing Time is told from the first person perspective of an unnamed narrator. The novel is divided into seven sections and alternates between two rough time periods: the narrator’s childhood and adolescence in Northwest London and her adulthood working for a pop star named Aimee, taking frequent trips to Africa to assist with Aimee’s charity project. The novel focuses on the relationship between the narrator and her childhood friend Tracey, a talented dancer who eventually descends into poverty.

Tracey and the narrator met each other in 1982, at a dance class held in their neighborhood church. The first section detailed their respective family lives. The narrator was raised by her autodidactic, overbearing Jamaican mother who was politically oriented and disliked motherhood. The narrator’s white father, whom her mother divorced when the narrator was a teenager, struggled to match his wife’s commitment to political and intellectual causes. Tracey was raised by her single white mother, who provided minimal supervision but bought Tracey an excessive amount of toys and clothing. Tracey’s black father, Louie, drifted in and out of prison and had another family. In Part One, the narrator discovered that her father also had two other children from a previous relationship. Tracey and the narrator bonded over their shared passion for dancing and their mixed race. At a birthday party for another girl in their dance class, the two were caught performing and videotaping a sexualized dance based off of a music video by the pop star Aimee.

The narrative cut to 1998, when the narrator had recently graduated from college and gained employment at a music channel called YTV. Aimee visited the music office to film a promotion; the narrator caught her attention and was later hired to be her assistant. As part of this job, the narrator began taking trips to an unnamed nation Africa to research a potential school charity project for Aimee. Assisted by a large team including a Sengalese man named Lamin and a man named Fern, Aimee successfully built the school but the narrator’ questioned its effectiveness, as it provided little for the community. The narrator’s mother became a Member of Parliament and began a relationship with a woman named Miriam.

The novel returned to the narrator’s youth. The narrator purposely failed an entrance examination to a prestigious private high school and attended public school, while Tracey was accepted at a performing arts school and the two drifted apart. The narrator experimented with being Goth. One night, at a party during which she had lost her virginity to a stranger, she witnessed Tracey overdosing on drugs and had her mother drive her to the hospital. Later, the two were invited to assist at a dance show at their old studio; Tracey stole the ticket money from the show, and when the narrator’s mother and the dance instructor accused her of doing so, Tracey’s mother accused Mr. Booth, the piano player at the studio, of sexually assaulting Tracey.

The narrator studied media in college and had her first serious relationship. After graduating, she worked at a pizza restaurant and subsequently as a stage assistant for the show Guys and Dolls, which Tracey was performing in. After working there for several months, the narrator secured an internship at YTV. When she told Tracey that she was taking the new job, Tracey sent her a letter revealing that she had seen the narrator’s father having sex with a black inflatable doll.

The narrative then returned to the African village; the narrator made several trips there and befriended a villager named Hawa, whom she stayed with and whom Lamin was attracted to. However, Aimee began a relationship with Lamin and wanted to acquire a visa for him to live in New York. The narrator was also given decreased responsibilities and removed from Aimee’s inner circle because her mother was publicly criticizing the government of the African nation. When the narrator visited her mother, she discovered that Tracey had been sending her mother frequent angry emails about various conspiracies. The narrator visited Tracey and found that she had three children from three different fathers and was no longer dancing.

Fern declared his love for the narrator, who was ambivalent about his feelings. When the narrator returned to Africa again, she and Aimee met a beautiful baby that the narrator had an instant emotional connection with. The narrator began an affair with Lamin to prove her independence from Aimee; Fern discovered this affair and grew resentful because he was required to arrange Lamin’s visa. Meanwhile, Aimee bypassed laws to adopt the baby that she and the narrator had met, naming her Sankofa. Fern revealed his knowledge of the affair and the narrator was fired, with nowhere to live and her New York visa set to expire in one month. The narrator stayed with acquaintances in the city and leaked information about Aimee’s illegal adoption to gossip magazines. She flew back to London and paid for Lamin’s flight to join her. Tracey released the provocative dance video from the birthday party the two had attended in childhood; this turned public opinion in the scandal against the narrator. The narrator discovered that her mother was severely ill and in hospice. She visited her mother, who told her she should adopt Tracey’s children. On the day the narrator’s mother died, the narrator went to Tracey’s flat and stood outside, watching Tracey dancing with her children.

More summaries and resources for teaching or studying Swing Time.