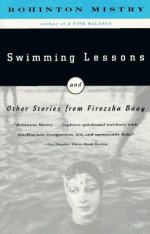 Rohinton Mistry
This Study Guide consists of approximately 70 pages of chapter summaries, quotes, character analysis, themes, and more - everything you need to sharpen your knowledge of Swimming Lessons.

Such a Long Journey (1991) is Mistry's first fulllength novel. It is about an ordinary middle class man from Bombay's Parsi community named Gustad Noble who becomes unwillingly entangled in the corruption of Indian national politics.

Dubliners (1914), James Joyce's famous short story collection about the people of Ireland's capital city, is a work Mistry has said was very influential on him. Like Mistry, Joyce was living away from the city he depicted when he wrote and relied heavily on his personal memories of his hometown.

Midnight's Children (1981), which first brought Salman Rushdie a wide audience and won Britain's Booker Prize, is an allegory about the birth of independent India. It is a good introduction to this important Indian writer.

The Things They Carried (1990), by Tim O'Brien, is a collection of interrelated short stories about a platoon of soldiers in the Vietnam...

More summaries and resources for teaching or studying Swimming Lessons.

Swimming Lessons from Gale. ©2005-2006 Thomson Gale, a part of the Thomson Corporation. All rights reserved.