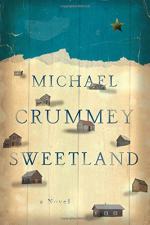 Michael Crummey
This Study Guide consists of approximately 106 pages of chapter summaries, quotes, character analysis, themes, and more - everything you need to sharpen your knowledge of Sweetland.

This detailed literature summary also contains Quotes and a Free Quiz on Sweetland by Michael Crummey.

Sweetland, by award-winning Canadian author Michael Crummey, was published in 2015. It is the tale of a small North Atlantic island in Newfoundland and an elderly man, both bearing the name of Sweetland. The government has offered a resettlement deal to the community, which is struggling after generations of industry loss and depopulation. It depicts the struggles of the community and Sweetland through this process.

The primary conflict in the first half of the novel involves Sweetland's near-solitary resistance to signing onto the resettlement package. Because the deal as offered is "all or nothing," all residents must sign or none of them will get the significant amount of money, more than many of them have ever seen in one go. As the remaining hold-outs sign on, the tension between the residents of Chance Cove and Sweetland increases. He receives anonymous threats, suffers vandalism and eventually arson. The pressure on him to sign on to the agreement is enormous.

The island's residents once relied upon cod fishing as their primary industry, but the fishing moratorium after the fishery was depleted has been in effect for two decades. After this moratorium, Sweetland was the lighthouse keeper. However, after the lighthouse became automated, he was forcibly retired.

Sweetland's relationship with his remaining relatives and other Chance Cove residents he's known his whole life are central to the action in the first half of the novel. He spends days with his autistic grand-nephew Jesse, sharing stories with him about his personal history, his long-dead family members and the island's history. He also worries about Jesse's future, should he be forced to live off the island. He serves as Jesse's closest friend and ally. These stories are deeply appreciated by Jesse, who begs for them to be told over and over.

Sweetland regularly visits with his life-long friend Duke Fewer and other friends at Duke's non-functioning barbershop, where they gossip and play chess. He keeps himself busy with the daily chores of maintaining his homestead. While Sweetland is on the outs with his fellow islanders, he plays a central role when a neighbor's cow is in a health crisis.

Eventually, Sweetland takes Jesse out for their once yearly allotted cod fishing trip, where he both confronts evidence of the community's wrath and Jesse helps him heal from the loss of his brother Hollis. After this experience, he agrees to sign the resettlement agreement, which results in Jesse's death.

The first six chapters are ended with a flashback to a time when a lifeboat full of Sri Lankan refugees were rescued by Sweetland and brought to the island. Each flashback furthers the story of this rescue, and how the community dealt with this event, which was significant in its history, bringing Sweetland into the media limelight for the first time. This flashback also addresses Sweetland's discovery that his sister has not been faithful to her husband, and his guilt in realizing that he's pressured her into a loveless marriage.

The second half of the novel depicts what happens to Sweetland after he fakes his death and returns to the island to live a solitary life of resistance. He struggles with the effort required to feed and warm himself, despite the preparations he's made to survive. He suffers greatly the loss of his community, eventually witnessing ghostly presences, lights, and sounds. He finds himself uncertain of what is real and what is not. After some months, he finds a lost dog with whom he has a dependent companionship.

The first six chapters in Book II are ended by flashbacks revealing the source of Sweetland's terrible scars and how he came to be alone.

Gradually, the border between the natural world and the supernatural world blur, and Sweetland suffers physically, escaping death more than once. He is moved to acts of desperation, only to be stymied again and again. Finally, he must face up to his own end and that of the island.

More summaries and resources for teaching or studying Sweetland.