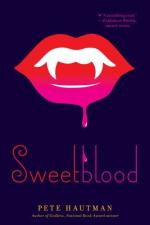 Pete Hautman
This Study Guide consists of approximately 36 pages of chapter summaries, quotes, character analysis, themes, and more - everything you need to sharpen your knowledge of Sweetblood.

Sweet Blood by Pete Hautman is a fiction novel written for young adults. Sweet blood tells the story of a diabetic girl named Lucy who is not only dealing with the everyday struggles of being a teenager, but she is also struggling to control her disease. Lucy turns to a vampire chat room for an escape from her life where she feels everyone thinks she is crazy. However, the chat room turns into more than an escape when Draco, one of the chat room participants finds her.

Lucy used to be like everyone else until she was diagnosed with diabetes. Even then, Lucy is able to lead a normal life until she started to lose control of her diabetes. As Lucy's diabetes spirals out of control, her life starts to spiral downwards also. Lucy loses interest in school and struggles with the relationships of those around her. Lucy dresses like a goth but calls herself a vampire. She starts going to a vampire chat room where she discusses her theory about vampires with fellow vampires. Though Lucy does not actually believe anyone in the chat room is actually a vampire, there is one participant named Draco that makes her change her mind. Lucy is convinced that Draco is a real "blood sucking" vampire. Lucy has a theory that vampires do exist, they are simply diabetics. Additionally, vampire stories were actually based on diabetics but because people didn't know what diabetes was back then they labeled these people as vampires.

Lucy writes a paper about her theory and per parents are called into a meeting which results in her being referred to receive psychological help. Meanwhile, Lucy meets a new student in her class named Dylan. Dylan seems to be a confident and intriguing guy who is Lucy's type. Lucy and Dylan begin to hang out and he introduces her to a man named Wayne who calls himself a real vampire. Wayne is a middle aged man who has wild parties at his house with college and high school students much younger than him. Wayne seems to be an open minded father-like figure who is more than willing to offer advice and guidance to his "friends" that come to his house. Lucy is intrigued by Wayne when she meets him, he raises butterflies in his home and seems to know so much about everything, especially about her.

Lucy's diabetes is out of control. She is not testing her blood and taking her medicine like she should be. Lucy keeps having more and more diabetic episodes and they are getting worse. Lucy's behavior is also changing negatively. Lucy is fighting with her parents, teachers, and even treating Mark, her close childhood friend, badly. Lucy keeps getting more angry at everyone and getting her computer taken away makes things worse.

Finally, at one of the parties, Lucy realizes that Wayne is Draco and he is just a creepy man who likes young girls. Wayne was able to piece together the information that Lucy provided and find her. Wanye used Dylan to bring Lucy to the party. When Lucy finds out she is furious and is able to see Dylan, Wayne, and the party scene for what they truly are. Lucy has a reaction and leaves the party. She passes out and Mark finds her and saves her life.

Lucy realizes that she needs to change and she decides she is going to change and make her life better because everything she is doing is not working out for her. Lucy discovers that those who love her the most are her family and Mark.

More summaries and resources for teaching or studying Sweetblood.