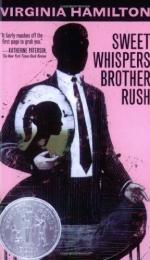 Virginia Hamilton
This Study Guide consists of approximately 30 pages of chapter summaries, quotes, character analysis, themes, and more - everything you need to sharpen your knowledge of Sweet Whispers, Brother Rush.

Virginia Hamilton uses an unusual form of disease in the story. The disease, porphyria, is a genetic blood borne disease thought to be transferred through the male gender in families. M'Vy states she has learned that porphyria can also attack females, although it is not as common. Brother Rush and M'Vy's other brothers had acute cases of porphyria. Brother is the only one that didn't die from the disease, although the story strongly suggests that it is the reason for his suicide.

The disease is caused by anomalies in certain enzymes. M'Vy tries to explain the disease to the nurse at the hospital. It is clear that M'Vy knows a great deal about the disease. M'Vy also has tests and information on Brother's condition which she believes can help Dab.

The symptoms of porphyria, as stated in the book, include: discoloration of skin, unusually discolored urine and stools...