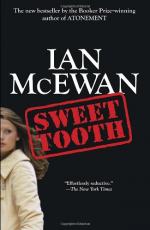 Ian McEwan
This Study Guide consists of approximately 55 pages of chapter summaries, quotes, character analysis, themes, and more - everything you need to sharpen your knowledge of Sweet Tooth.

“Sweet Tooth” by Ian McEwan is the story of Serena Frome (rhymes with plume) and her brief tenure with Britain’s famous MI5 – Military Intelligence, Section 5. The story begins in present day as Serena tells the reader about her experience some forty years before when she was a young woman. She reflects on her life beginning with her childhood in an upscale community in Camden. Her father was an Anglican Bishop and her mother the perfect Bishop’s wife. Serena displayed an aptitude for math at a young age. When her thoughts turned to college, the figured she’d take the easy way out that most girls opted to and major in English. But her mother – a feminist before her time – insisted that she major in math. She didn’t want to see Serena abandon her natural abilities in math just because she was a girl. Serena was accepted into the math program at Cambridge.

In her last year of school, Serena had a boyfriend named Jeremy, but their relationship was dysfunctional. He didn’t seem to be attracted to her. Jeremy introduced Serena to his history professor, Tony Canning. Jeremy left for Edinburgh to pursue an advanced degree, and Serena fell into the older man’s arms. Jeremy wrote later that he had fallen in love with a male musician which explained the dysfunction in their relationship.

Tony completely dominated his relationship with Serena relationship in part because he was old enough to be her father. She fell head over heels in love with him even though he was married. In the end, he accused her of trying to break up his marriage by leaving behind a piece of her clothing. She was innocent of the charge, but he ended the affair and broke her heart. Before the breakup he had arranged for her to have an interview with MI5. She didn’t know exactly what it was. If she had to guess, it had something to do with social security.

Serena was offered the position of junior desk officer and reluctantly accepted it. Never before in her life had she had any aspirations to be a spy, but there she was. She had a brief dalliance with Max, another young spy, but that relationship ended when he announced he was engaged. Serena was a beautiful blond and was chosen for a new covert operation. She had to convince a young writer to join a front group that would disseminate anti-Marxism propaganda. The young writer, Tom Haley, was immediately taken with Serena who represented herself as a literary agent. Tom was drawn into the project by the stipend he would receive and especially by the beautiful Serena.

Serena and Tom eventually become involved and fall in love. But, Serena is in a quandary. She has deceived and lied to the man she loves from the minute she first met him. How does she ever tell him who she is and whom she works for? As soon as she does, she will surely lose him. In the end, she learns a lot of lessons. The most important one is that spies are not the only ones who are skilled at deception.

More summaries and resources for teaching or studying Sweet Tooth.