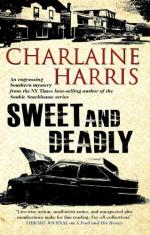 Sweet and Deadly Topics for Discussion

Why does Catherine not recognize Leona when she first finds the body? Why do you think the killer took Leona to Catherine's property? Does this imply a connection to the murder of Catherine's parents?

How does Catherine know her parents were murdered? Why has their murder not been solved? Who could have killed them? Why does Catherine think the two murders are related? Could Leona have known something that got both herself and Catherine's parents killed? Why did the killer wait so long to kill Leona?

What does Randall do that makes Catherine begin to think of him in a romantic light? Why has Catherine never thought of Randall in this way before? Do you think Catherine's relationship with Randall has an impact on her later actions? Why or why not?

Discuss Tom. What is Tom's role in the novel? Is Tom a romantic...