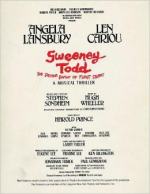 Think about how a dramatic version of Sweeney Todd could be produced without the musical passages. Determine what scenes or dialogue you would have to add if you cut out these passages.

Research the original version of Sweeney Todd written by George Dibden-Pitt and trace the development of the story into Wheeler's play.

Read Jonathan Swift's satire "A Modest Proposal," which also focuses on cannibalism. Compare and contrast it to the play.

Investigate the living conditions of the lower class in Victorian London. Does the play present a realistic depiction of these conditions?