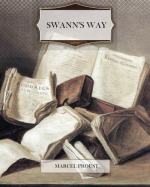 Marcel Proust
This Study Guide consists of approximately 33 pages of chapter summaries, quotes, character analysis, themes, and more - everything you need to sharpen your knowledge of Swann's Way.

Swann's Way, Remembrance of Things Past was written by Marcel Proust. It was originally written in French, and Swann's Way is just a portion of the entire manuscript. This edition is translated by C. K. Scott Moncrieff and Terence Kilmartin. It is set in France, during an unspecified time, probably late 1800's, early 1900's.

The book is comprised of four parts, narrated by an unidentified French gentleman, remembering his life as a boy, and centered around another older man named Charles Swann. The Narrator begins his story by describing his lifelong inability to sleep well. He is unhappy to be in his room alone and thinks of ways to bring his beloved mother into his room for additional attention. Every piece of furniture in the room, including the walls, drapes and lamp, is described in detail. The Narrator further tells the reader of the emotions evoked by each one.

The Narrator has vivid memories of his dreams, his thoughts before sleeping and his thoughts while awakening. His memories of Combray, a town where his family used to spend their summers, are special to him, and the town is described for the reader in detail. While in Combray, the Narrator's family stay with a great aunt, take long walks in the countryside and interact with the people who live year round in Combray. The great aunt is a wealthy hypochondriac whose relatives and staff are amused by her behavior but love her anyway. The Narrator's experiences with the aunt color his world, and he distinctly recalls helping her with her various herbs and medicines and overhearing her discussions with her few visitors.

Combray is described as the perfect sleepy French village, with eccentric landowners, busybodies, church goers, a boring reverend, and shopkeepers. The characters of the great aunt and her handmaid are drawn especially clearly, and their sad lives are evident. The Narrator speaks at length about the town's surroundings and walks he and the family take about the area. Rivers, paths through the woods, trees, flowers and animals are all described in rich detail, engaging all the senses of the reader.

A neighbor in Combray, who also is an acquaintance from the family's Parisian home, is Charles Swann. Charles Swann is well connected with the French aristocracy and therefore lives a life of interest to the Narrator. Charles Swann falls in love and marries a courtesan named Odette; the third chapter of the book recites the story of Swann and Odette, their meeting and love affair. Swann is an gentleman, with a love of art, theatre and women; Swann's life is often the subject of discussion with the Narrator's family. He is admired by some in the family and looked down upon by others. Through the family discussions and stories from Swann himself, the love affair is told to the reader. It is not a happy love affair because Odette soon tires of Swann once she has won him. Although other references in the book show that Odette and Swann eventually marry, the third chapter ends with that conclusion well in doubt.

In the last chapter of the book, the Narrator is in the story again and tells of his own love of Gilberte, Swann's daughter. The Narrator happens upon her first when he is a young boy playing in the woods of Combray but does not see her again until sometime later in Paris. He becomes obsessed with this child of the man his family seems obsessed with and begins to build his life around her every move. Gilberte is unconcerned and unconnected to the Narrator, and the novel ends with the Narrator taking on the characteristics of his great aunt and of Swann, observing the world, loving parts of it, but not actively taking part in it.

More summaries and resources for teaching or studying Swann's Way.

Swann's Way from Gale. ©2005-2006 Thomson Gale, a part of the Thomson Corporation. All rights reserved.