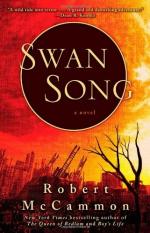 This detailed literature summary also contains Topics for Discussion and a Free Quiz on Swan Song by Robert R. McCammon.

"Swan Song" is the story of a post-apocalyptic United States of America and its inhabitants. The USA and the U.S.S.R have destroyed each other with nuclear weapons. On their way out of desolate Manhattan, Sister and Artie find a magical glass ring that allows them to dream walk. They also encounter an evil character, later known as Friend, who pursues them across the country. Roland and Macklin find their way out of Earth House and Swan and Josh follow a gopher hole to get out of their basement. Each group is led on an adventure that will eventually bring them together: Josh and Swan meet Leona Skelton who foretells Swan's importance in the future; Sister and Artie meet Paul Thorson who continues with Sister on her quest to find what her dream walks mean; and Roland and Macklin make their way across dirtwart land with Sheila to the Settlement, overcoming the leader there and forming the Army of Excellence.

All, seven years later, are encased in Job's Masks: tough growths that hide their heads as their faces are reshaped. Swan and Josh are joined by Rusty and together they trek across the landscape until Swan brings an apple tree back to life. She is hailed as having the secret of life and the trio continues to Mary's Rest. Macklin and Roland are the leaders of the Army of Excellence, a Nazi-esque army. They have no regard for human life. Sister and Paul are on the path set for them by Sister's dream walks. They are joined by Dr. Hugh Ryan who says he can lead them to Mary's Rest, but on the way they are overtaken by Robin Oakes and his group of boys. Sister and Paul move on and are later joined by Robin. Swan spends a night planting corn seeds and the seeds grow, as does her reputation as a miracle. Her job's mask comes off and reveals beauty: a direct physical representation of her soul. Josh and Sister also appear as the best versions of themselves after their masks come off, although Roland and Macklin appear as monsters. Friend has searched for years for Sister and finally finds everyone in Mary's Rest. Though Swan forgives him for the evils he has performed, he cannot accept her forgiveness and sets off to make other people do his dirty work.

Swan, Sister, Josh, and Robin are captured during the battle at Mary's Rest. They convince Sheila to retrieve the buried glass crown for them. The whole army, now led by Friend, moves to Warwick Mountain in search of God. After arriving they realize God is the ex-President of the USA who has been hiding out since the blasts. Swan stops the Doomsday satellites at the last moment though Macklin and Roland are dead and Sister has been gravely injured. She is buried at the top of the mountain where the sunlight can reach her. Swan, Josh, and Robin descend from the mountain and the remaining members of the Army of Excellence kill the evil man. Swan and Robin travel the country revitalizing fields while Josh makes his way back to Glory. Swan becomes legend and the world is green again.