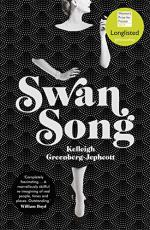 Kelleigh Greenberg-Jephcott
This Study Guide consists of approximately 84 pages of chapter summaries, quotes, character analysis, themes, and more - everything you need to sharpen your knowledge of Swan Song.

This detailed literature summary also contains Quotes and a Free Quiz on Swan Song: A Novel by Kelleigh Greenberg-Jephcott.

The following version of this book was used to create this guide: Greenberg-Jephcott, Kelleigh. Swan Song. London: Blackwing Titles Ltd., 2018.

The novel, which is told through the perspective of Truman Capote’s Swans, follows the lives of Truman Capote and his Swans. The novel’s main character, Truman Capote, is a famous author from the middle of the twentieth century. After receiving massive praise for his first novel, In Cold Blood, Truman spend the rest of his life trying to write his literary masterpiece, entitled Answered Prayers. Swan Song details the lives of Truman and his Swans before and after their fallout, the result of the publication of La Cote Basque, part of his unfinished novel, Answered Prayers.

The novel opens on Truman in his Los Angeles home in 1974, preparing to travel to see Lee Radizwill. He is offering his first chapter of La Cote Basque to Esquire magazine. The novel then jumps to 1975, the day Truman publishes his Esquire piece. Slim Keith is on the phone with Babe Paley discussing the story about The Sheets, a particularly vulgar piece about an affair. Truman’s writing is a thinly veiled story about the lives of the women who occupy his Inner Circle. Slim is livid that Truman is sharing their secrets.

The scene switches to an image of Truman’s childhood in Monroeville Alabama. He decides to write a story about Mrs. Lee, the mother of his best friend Nelle. He entitles it “Mrs. Busybody” and sends it in to a local writing contest held by the newspaper. Although he wins, there is such a ruckus about the content of the story that he is denied his prize.

There is a flashback to when Truman met Babe Paley. Babe, a beautiful Manhattan socialite, is wife to Bill Paley, the CEO of CBS. Truman was invited on a trip with the Paleys to Round Hill and he and Babe spent the entire trip together talking and sharing intimate details about their lives. Truman and Babe have a very special bond in the novel, Babe always being Truman’s favorite Swan.

It is now 1966 and Truman is planning a huge masquerade party at the Plaza Hotel in New York. There are similarities drawn between this party and the one he planned as a boy in Monroeville, planning to leave for New York City to meet his mother. He plans to have a guest of honor at his Plaza party, Kay Graham. Truman takes pleasure in deciding who will be invited to the party, marking the names of the invited and uninvited in a notebook.

The novel turns to 1974 with Truman traveling with Marella Agnelli, another one of his Swans. Marella does not have a positive response to Truman’s Sheets story, and so Truman tells her about an affair of her husband Gianni. After this incident, Marella is wary about her friendship with Truman. Once Truman reveals Gianni’s affair, Marella begins to recall her difficulties with Gianni, mostly revolving around his infidelity. Most notable was the time they hosted Lee and her sister, Jackie Kennedy. Gianni was particularly close to Jackie, prompting newspaper headlines about their romantic vacation. Marella struggles to deal with this and eventually asks her husband to slow down his life.

The following year, after the release of Truman’s Esquire piece, Babe finds out she has cancer. This promotes a change in Babe and she is much more vocal about her opinions. One day the group is dining in Manhattan and Truman walks into the restaurant. Although the group is cold to him, he tries to remain upbeat and Babe wishes she could talk to him.

The novel then describes the day Truman’s Esquire piece was published. He sent both Babe and Bill a copy before it was published. Babe, upon receiving the writing, is distraught and calls Bill who claims to know nothing about the story. However, he meets with Slim later in the day to discuss Truman’s betrayal. Both Babe and Slim refuse to talk to Truman and he enlists the help of his lover, Jack. Although Jack begs both of them to talk to Truman, they refuse.

In a flashback to Slim’s marriage with Leland Hayward, the novel describes Slim’s discovery of Leland’s affair with Pam Churchill. Devastated, she receives a call one morning from Truman asking her to lunch. When she arrives, she is met by the rest of the Swans. As they wait for Truman’s guests of honor, Pam Churchill—who slept with multiple women’s husbands—walks into the restaurant and soon after, the husbands of the Swans. Truman is giddy over the victims meeting the perpetrators.

It is 1978 when Babe dies. Before her death, she took pains to ensure her last luncheon would be memorable. Also, she meticulously cataloged all of her belongings to be distributed amongst her friends and family. Babe made sure that Truman would not be at her memorial nor did she leave him anything.

Once Truman learns about Babe’s death in the obituary, he begins to fall into a deep depression, relying on alcohol and pills. The day after Babe’s death, failing to find out where the memorial would be taking place, he appears on live television, drunk. After the show, Truman flees to his home in Sagaponack. Soon after, C.Z. stages an intervention for Truman, taking him to a rehab center in the Midwest. On the plane ride there, she tells him the story of her life.

There is a flashback to Truman’s big party in 1966. It is a masquerade held at the Plaza Hotel. During the party, many people come to resolutions about their past and current lives.

It is 1979, and Truman is being sued for libel by Gore Vidal, another writer who is a literary rival of Truman. The case centers around a story Lee told Truman about a White House dinner. Truman tries to get Lee to testify for him, but she refuses and insults him. Seeking revenge, Truman appears on television to tell the country about Lee’s secrets.

A year later, Truman is struggling to find his place in society and begins to associate with a “new elite.” He occupies dirty nightclubs and reminisces about his Swans. Slowly, the novel describes Truman’s mental and physical health failing, with him struggling to remember words, seeing people who do not exist and continuing to take drugs and liquor.

After a salacious book is published about Truman’s childhood, he travels home to see his childhood friend Nelle. She tries to take care of him. However, once he returns to Manhattan the voices in his head continue and he engages in a battle between the narrator (his Swans) and himself.

Truman is with Joanne Carson when he dies. One morning he awakes and finds himself paralyzed. As Joanne holds him, he begins to see snapshots of his life and everyone he used to know. He sees his mother, smiling and offering him a hand, and Truman follows her, floating along a river.

More summaries and resources for teaching or studying Swan Song: A Novel.