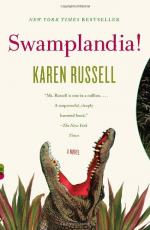 “The Spiritist’s Telegraph” is the book that Ossie found at the Library Boat and began reading in her spare time. It symbolizes the beginning of her act of dabbling in the occult.

This heart-shaped bottle of perfume belonged to Ossie and Ava’s mother. The scent reminded them of their mother and they used it instead of washing their clothes rationing it so it would last longer. One day when she had been left alone by Ossie Ava intentionally dropped the bottle and broke it her way of voicing her anger with Ossie. The bottle of perfume was a symbol of the girls’ mother.

Ossie made a purple turban for herself with a gold star on it to wear when she was performing her séances. The turban was a symbol of the spiritual power that...