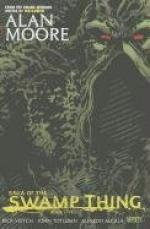 This detailed literature summary also contains Topics for Discussion and a Free Quiz on Swamp Thing by Alan Moore.

Swamp Thing Volume 1 reproduces issues 21 through 27 of the comic book Saga of the Swamp Thing, which first ran in 1984. Though writer Alan Moore took over writing duties with issue 20, issue 21 is when Moore radically alters the origin of the title character and creates a new kind of Swamp Thing.

In issue #21, a villain botanist named Jason Woodrue, whose supervillain alterego is the plant-man Floronic Man, is hired by someone only identified as "the old man" to dissect Swamp Thing's body and discover the source of his power. Woodrue discovers that Swamp Thing only absorbed the consciousness of Alec Holland, and is not a form of Alec Holland himself. That is, Swamp Thing is truly a monster and has no inner humanity. The old man is killed when Swamp Thing awakens and discovers this revelation, asphyxiating the old man out of rage.

Issue #22 has Swamp Thing returned to his swamp in Louisiana, part of the swamp in a self-induced coma, having no will to live. Woodrue consumes a yam-like tuber that grew from Swamp Thing, and hooks his mind up to a flower that grew from Swamp Thing. The result is that Woodrue acquires the consciousness of the entire earth's vegetation. He goes mad from this overwhelming experience, and becomes convinced that he must eradicate all animal life in revenge for what humans and animals have done to earth and plants through industry, etc.

Issue #23 has Swamp Thing, in a dream sequence, coming to grips with his lack of humanity and existence as a plant-man. This happens as Jason Woodrue, as the Floronic Man, destroying the town of Lacroix by ordering vines to crush houses and plants to produce too much oxygen, causing an atmosphere that explodes in flames after a match is lit.

In issue #24, Swamp Thing confronts the Floronic Man, and defeats his evil plan with simple logic: if all animal life was killed, there would be no beings to exchange gases with plants, and so the plants would die as well. The Floronic Man goes mad, confronted with this knowledge, and is eventually sent to Arkham Asylum by the Justice League of America.

In issue #25, a strange psychic named Jason Blood comes to Baton Rouge to battle a being called the Monkey King. The Monkey King is controlled by an autistic boy named Paul at the Elysium Lawns Center for Autistic Children, which Swamp Thing companion Abby Arcane has just joined as an employee. The Monkey King begins praying on children's fear in the center.

In issue #27, Etrigan wishes to kill and eat Paul to stop the Monkey King, and Swamp Thing battles the demon to stop him. Paul and Abby flee to the swamp and are confronted by the Monkey King. Paul overcomes his fears and tells the Monkey King he is not afraid of him. The Monkey King literally shrinks in size, to the point that Etrigan makes a bite-sized snack of him. Etrigan warns Abby that some other sinister force is at work but will not elaborate. Swamp Thing returns Paul to the Children's Center.