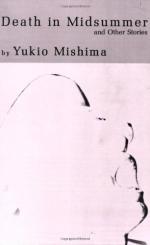 Yukio Mishima
This Study Guide consists of approximately 51 pages of chapter summaries, quotes, character analysis, themes, and more - everything you need to sharpen your knowledge of Swaddling Clothes.

Like the babies in the story, the homeless youth functions more as a symbol than a character. Sleeping on a park bench, his ragged body covered in newspapers for warmth, he forms a stark contrast to the luxurious Imperial Palace looming in the background. Bundled in newspapers, he reminds Toshiko of the nurse's baby and is the immediate manifestation of the crime, poverty, and ignominy that the illegitimate baby will inevitably inherit in a social system divided by class. As if to confirm Toshiko's fears that different classes can only interact through violence, the homeless youth attacks Toshiko and most likely murders or rapes her.

The Nurse that Toshiko and her husband hire to tend to their baby lies about her pregnancy, claiming that her stomach is swollen because of "gastric dilation." Like Toshiko's husband, she seems unconcerned with the moral implications of her pregnancy...

More summaries and resources for teaching or studying Swaddling Clothes.

Swaddling Clothes from Gale. ©2005-2006 Thomson Gale, a part of the Thomson Corporation. All rights reserved.