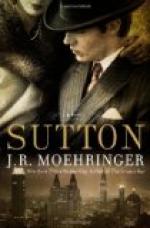 J. R. Moehringer
This Study Guide consists of approximately 26 pages of chapter summaries, quotes, character analysis, themes, and more - everything you need to sharpen your knowledge of Sutton.

As the novel and the story unfolds, Sutton faces his past, including the people that were involved in his life and the crimes that Sutton was responsible for committing over the years. As the reporter and the photographer put together various clues gleaned from police and FBI files, they conclude that Sutton's story is often quite different from the records.

By the end of his life, Sutton is finally able to publish a few books. The book that he is never able to publish is the one that he wrote while he was in prison. In spite of thinking he would die on Christmas day following his release, Sutton ends up living eleven more years. When Sutton dies, he takes to his grave the truths about his life, his crimes, and his one true love - Bess.

More summaries and resources for teaching or studying Sutton.

Sutton from Gale. ©2005-2006 Thomson Gale, a part of the Thomson Corporation. All rights reserved.