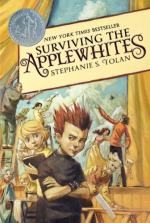 Stephanie S. Tolan
This Study Guide consists of approximately 33 pages of chapter summaries, quotes, character analysis, themes, and more - everything you need to sharpen your knowledge of Surviving the Applewhites.

Surviving the Applewhites is the story of thirteen-year-old Jake Semple who after accidentally burning down his school, has been forced to live with an eccentric artist family to avoid being sent to a juvenile detention center. The experience of living with this open-minded and loving family changes Jake's view of the world and ultimately of himself.

From the moment Jake Semple steps foot on Wit's End, the sprawling land owned by the eccentric Applewhite family, he knows he doesn't belong. Jake has dyed red hair gelled into spikes, an eyebrow ring, and he wears all black clothing. All his life, people have been telling Jake that he's a bad kid and that no one has high expectations for his future. He is a foul-mouthed smoker bent on making his stay at the Applewhite home short lived. The Applewhites are an artistic family made up of furniture-making patriarch Zebediah, his two sons Archie, a sculptor, and Randolph, a theatre director, and their respective wives, Lucille, a poet, and Sybil, a bestselling mystery novelist. Archie and Lucille have no children, but they house Ravi Govindaswami, a spiritual guru and Jeremy Bernstein, a budding journalist as well as two adopted goats, Wolfie and Hazel. The other adult couple, Randolph and Sybil, have four children: Hal (a reclusive artist who lives solely in his bedroom with no interaction with the outside world); Cordelia (a ballet choreographer); E.D. (a scientifically-minded organization freak); and Destiny (a four-year-old singer with an insatiable amount of questions). Rounding out the Applewhite family is Winston, the family basset hound and Petey, Zebediah's foul-mouthed parrot.

The novel is split between the perspectives of E.D. and Jake, two teenagers who feel as if they don't properly belong anywhere. Jake, an outcast in society due to his bad behavior, feels as if he is misunderstood, that he is not as bad as everyone makes him out to be. E.D. on the other hand, feels invisible in her family of artists. She has no real artistic talent, and she feels as if her family ignores her because of this, that they have no appreciation for her talent: organization. When Jake arrives to live with the Applewhite family, everyone embraces him with open arms. Everyone, that is, except E.D. who does like the idea of sharing her academic curriculum with a delinquent. For the first few weeks of the new move, Jake is miserable. He hates the mostly-vegetarian diet the Applewhites subscribe to, hates meditating, hates monitoring his own school work, and most of all, hates the weird artistic family that has put their faith in him. All this changes when Randolph Applewhite is asked to direct the community theatre's new production of The Sound of Music. After a string of accidents and mishaps, he is left with no directorial team - no sound crew, no costume crew, no make-up girls, no assistant director, etc - and the show has been threatened to close. Showing their staunch support for each other and their familial love, the entire family bands together to keep Randolph's performance on the stage. Even Jake surprises himself by agreeing to act as Rolf, the teenager turned SS soldier, in the production. Randolph's colorful directorial choices have gained nationwide media attention, and a film crew has even been sent out to make a documentary about the family.

With only two weeks before the play is scheduled to open, the community theatre cancels the production after Randolph refuses to cast the theatre president's daughter as Gretle, the youngest von Trap singer, opting to cast his four-year-old son in the role instead. Rather than throwaway the family's month-long hard work, the Applewhites transform their barn into a community theatre and thinking creatively the whole time to avoid various mishaps, produce the play to rave nationwide reviews. Through the course of the production, the family, which had been fraying due to their focus on individual artistic projects, bands together as a unified front. After being hired as her father's assistant manger, E.D. realizes that her talents truly are valued in the family and Jake realizes that acting is the first thing in his life to bring him joy. By the end of the novel, all the individual character flaws have been smoothed out in a testament to family love, dependence on others, and above all, believing in yourself.

More summaries and resources for teaching or studying Surviving the Applewhites.