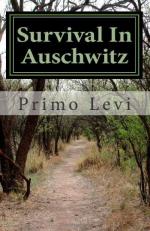 Primo Levi
This Study Guide consists of approximately 32 pages of chapter summaries, quotes, character analysis, themes, and more - everything you need to sharpen your knowledge of Survival in Auschwitz.

The Fossoli Detention Camp, near Modena, was a vast, Italian detention camp used to house various elements deemed undesirable by the Fascists. Levi was an inmate of the camp for several weeks and was joined there by about 650 other Italian Jews. Levi and the other Jews were eventually deported from Fossoli to Auschwitz. He describes Fossoli only in general and brief terms, and, aside from being a military prison, the camp appears to have been fairly benign.

Auschwitz is the name given to a system of death and forced labor compounds located in Upper Silesia and operated by the Nazis during World War II. Levi, along with hundreds of thousands of other Jews, was forcibly deported to Auschwitz, where he was assigned to the forced labor camp of Monowitz-Buna. Most Jews were not so "fortunate" and were instead quickly murdered, their remains cremated and...

More summaries and resources for teaching or studying Survival in Auschwitz.