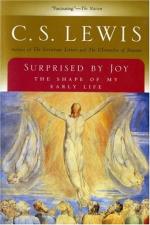 C. S. Lewis
This Study Guide consists of approximately 14 pages of chapter summaries, quotes, character analysis, themes, and more - everything you need to sharpen your knowledge of Surprised by Joy.

In his book titled "Surprised by Joy: The Shape of My Early Life", author and thinker C.S. Lewis sets out to describe the ways in which his childhood and education shaped his mind and trained his thinking to lead ultimately to his concluding that Christianity was the most valid and comprehensive answer to his inherent longing for the experience he calls Joy. He follows the thread through his youth and into adulthood as he experiences Joy, first in his imaginary and literary world, later in nature. Finally, after long searching for joy intellectually and aesthetically, those searches pointed to the transcendent Source and Author of joy, the God of Christian scripture.

His mother was a mathematician from a refined, English family and died of cancer when he was young. His father was a boisterous Welshman, clever, but distanced by the quirky mental habits that made communicating with the author a lifelong challenge.

Lewis' description of his education starts at his time at a soon-to-fail private school under a master he called "Oldie." Oldie was slipping mentally and cruelly treated both his students and his family, but Lewis learned both a small amount of math from him and to take refuge in his reading. Next Lewis spent a short time at a private school called Campbell, which he enjoyed and where he witnessed honest and fair bullying in an era which ran parallel to the time he spent with the cousins on his mother's side, who would teach him his few social graces.

His experience at the school taught Lewis both to be happy in the moments he was away from school and to endure those moments when he was not. It was at Wyvern that Lewis' religiosity began to be a burden to him because of a belief impressed upon him that prayer should come with a certain feeling of belief. This idea about prayer led him to feel compelled to stay awake at night until he felt sufficiently convinced of his sincerity. It was the exhaustion from that misled quest that led him to finally shake off his religious conviction and rest easy in atheism.

He calls his time at Wyvern and his boyhood, his Dark Ages, and recounts coming out of their glum and joyless darkness in the chapter called "Renaissance," beginning when he read "Siegfried and the Twilight of the Gods," and discovering Wagner's music for it. It brought him into Norse mythology and the beauty of nature even more deeply, and inspired him to seek that kind of joy incessantly. Lewis' next teacher shared his atheism and taught Lewis logic in thought and speech. This was Kirk, or "The Old Knock."

Lewis was next for Oxford, where he studied philosophy and linguistics and used his skill at living in the moment to retain his happiness and ease while he waited for his time to go to war. His war time showed him even more surely how virtuously he wanted to live, having witnessed the decline of a quality mind into madness and fear of hell. His faith was not a reality until further reading and contemplation forced Lewis to conclude that the writers who had the best understanding of the human condition usually had a belief in the existence of a Creating Mind.

That was the initial admission that made him examine Hinduism and Christianity together and finally conclude that the style of writing and historical coherence made Christianity the inevitable logical conclusion. Lewis concludes his book just at the moment that he has completed telling the story of his conversion from atheism to Christianity, having told only the story he set out to tell and nothing more.

More summaries and resources for teaching or studying Surprised by Joy.