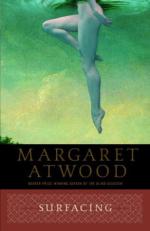 Atwood separates the narrator’s experiences into three parts. The reader learns about the narrator as she learns about herself. In the first part, Atwood’s narrator explores her views on poverty, rural and city life in Canada, the Canadian political life in the early 1970’s, and the American conflict in Vietnam, in addition to considering her life’s choices and changes. The narrator’s voice strengthens as the novel progresses, and in the second part of the novel, as she discovers more about her past, her parents, and her family life, she also discovers personal values she did not know she had. In the novel’s final section, the narrator comes into a self-knowledge that not only incorporates the knowledge of her past and her family but also her own sense of self-worth and strength.

Other characters in the novel are minor but have significant influence on the narrator’s life and sense of self. These characters include her father and mother, her brother, Paul, Evans, and a group of tourists who, though they are Canadian, the narrator calls “the Americans.” Their interactions with the narrator create a powerful lens through which the narrator begins to view her world, her values, and her life choices. As the story moves toward a dramatic climax and open-ended conclusion for the narrator at the end of the novel, the reader learns much about her life view and values that emerge as the narrator finds what her father and her mother left behind for her to discover about herself.

Atwood’s novel explores the life of this “Everywoman” of the early 1970’s as she learns what it means to be an independent and fully self-reliant human being with full awareness of her consciousness and life goals. The journey that the main character undertakes to arrive at this knowledge is exciting, difficult, at times almost hallucinatory, dangerous, even life-threatening, but it is ultimately a powerfully personal journey that mirrors the power she finds in herself.