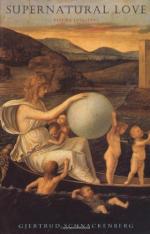 Gjertrud Schnackenberg
This Study Guide consists of approximately 22 pages of chapter summaries, quotes, character analysis, themes, and more - everything you need to sharpen your knowledge of Supernatural Love.

In the 1980s, a number of young American poets, Gjertrud Schnackenberg among them, began writing poetry in rhyme and meter rather than in the free verse that had dominated the American poetry scene since the late 1950s. Schnackenberg's Supernatural Love is written in iambic pentameter, a meter of five two-syllable feet with the first syllable accented and the second unaccented; it is divided into tercets, or tripletsthree-line stanzas in which the last word of each line rhymes with the other two. Thematically, the poem explores the relationship between the history and definitions of certain words and Christian theological doctrine, weaving these elements into a touching anecdote about the relationship between a four-year-old girl and her father.

Supernatural Love, was first published in Schnackenberg's second collection of poetry, The Lamplit Answer, in 1985. It subsequently has been reprinted in many poetry anthologies, including the second edition of the Norton Anthology of Modern Poetry (1996). The Lamplit Answer was so well received by critics that during the 1980s Schnackenberg was considered one of the outstanding young poets writing in America. Her later publications have solidified her reputation. Much of her work is difficult, but Supernatural Love is one of her most accessible poems.

More summaries and resources for teaching or studying Supernatural Love.