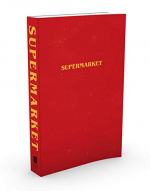 This detailed literature summary also contains Quotes and a Free Quiz on Supermarket by Bobby Hall.

The following version of this book was used to create this study guide: Hall, Bobby. Supermarket. New York: Simon & Schuster, 2019.

Supermarket opens with the narrator Flynn announcing that he had just killed a man. His victim, unnamed at this time, was bleeding out on the supermarket floor. Flynn lit a cigarette for the man.

Flynn then explains how he eventually found himself in this position. He was a 24-year-old man living in Baker City, Oregon, and he had just experienced a bad break-up. He had come into some money, but he knew it would not last long, so he went to apply for a job at the local supermarket, Muldoon's. Flynn was hired by assistant manager Ted Daniels, and met another employee, Frank, with an outsize, aggressive personality. The two immediately became friends. Flynn also met Mia, a bakery employee with whom he immediately developed a romantic relationship. Flynn further explains that he was working at Muldoon's to gain inspiration for a novel he was writing, which he wanted to set in a supermarket. His ex-girlfriend, Lola, had broken up with him in part because he never finished anything he wrote. Shortly thereafter, Flynn received an acceptance letter from a publishing company in New York for a manuscript prospectus he had sent. He now had two reasons to finish a book—to prove to Lola he could do it, and to fulfill his contract with the publisher.

Flynn and Mia continued to grow close, and so did Flynn and Frank. Flynn felt as though Frank was like his subconscious mind made manifest; Frank said aloud what most people would only think to themselves, and aggressively pursued whatever he wanted. Flynn made Frank the protagonist of his novel. One day, Flynn had a panic attack in the store, and in the days that followed, he continued to have worrisome symptoms of mental health problems. After googling these symptoms, he realized he was suffering from “derealization” (88), a symptom of schizophrenia. Frank asked Flynn to tell another employee, Rachel, that he was interested in her, and Flynn did, getting Rachel's phone number for Frank. Frank and Rachel began a sexual relationship, and Frank regularly called Flynn to narrate the details of their trysts.

Frank told Flynn he kept a gun in his locker, and laid out a plan to potentially rob Muldoon's. Flynn decided he would make this robbery the climactic event in his novel. One night, while he was writing, Flynn was interrupted by Mia angrily knocking on his door. She stated that another Muldoon's employee had seen Flynn out on the town flirting with Rachel. Flynn told her it was Frank that was dating Rachel, not him, but she stormed off. Flynn sat down to write the robbery scene for his book, wearing a ski mask and drinking scotch to get himself into Frank's mindset. The next morning, Flynn arrived at Muldoon's to discover that it had been robbed—by him. He was visible on the store's security monitors. He realized that Frank was not real, but a delusion he had invented for his book. The police arrived and arrested Flynn.

In Part II, Flynn woke up and discovered he was not in jail, but in a mental hospital. His psychiatrist, Dr. Olivia Cross, explained that he had been there for two years, living his time at the supermarket over and over again in a loop of delusions. He also learned that his novel had been published, and was a tremendous success. Flynn's mother visited and informed him that Mia had also been to see him frequently throughout his ordeal. Flynn was given anti-psychotic pills from a nurse, but he only pretended to take them, hiding them in his jacket pocket instead. Flynn spoke to another patient, an older black man named Red, who told him that he had also experienced delusions after his wife died. Red encouraged Flynn to confront Frank directly. Shortly thereafter, Frank appeared in the mental hospital and demanded Flynn meet him at Muldoon's.

Flynn asked Mia to help him escape from the mental hospital and take him to the supermarket. Red helped as well, by securing disguises for both himself and Flynn. At the store, the three split up, and Flynn retrieved Frank's gun from his locker. He spotted Frank in the aisles and fired the gun, but when he ran to where Frank had fallen, Red was lying in the aisle, bleeding out. Flynn exclaimed in shock that he had shot Red, but Mia told him that Red had not come with them at all. Frank appeared, now holding Mia hostage with another gun, and told Flynn that Red was another delusion he had invented. Mia stomped on Frank's foot to get away from him, and Flynn and Frank grappled in a vicious fight to the death. Suddenly, Flynn's jacket pocket tore open, and the pills he had been storing inside it came tumbling out. Frank stumbled on the pills and fell to the floor, hitting his head. As he lay dying, Flynn lit him a cigarette.

In the epilogue, Flynn says that he published a memoir based on his experiences, and that he was preparing to move to New York City with Mia. However, it is technically possible that this ending is another of Flynn's delusions.