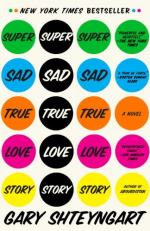 Super Sad True Love Story is a speculative romance novel by Gary Shteyngart in which New Yorker Lenny Abramov attempts a relationship with the much younger Eunice Park in a dystopian future America that is collapsing. Lenny, 39 and one day hoping for immortality, works for Staatling-Wapachung, a wealthy business that deals in property, security, and life extension (in which health regiments and beta technology rejuvenates human bodies). Lenny works as a salesman for the life extension department of the company. While in Rome for work, Lenny meets 24-year-old Korean-American Eunice Park at a party held by a mutual friend. Lenny is immediately smitten with Eunice, who herself is mildly attracted to Lenny. Lenny pursues Eunice online after he returns to the United States.

Eunice, who emerges from a failed relationship, and who deals with family dramatics by way of her father’s alcoholism and physical abuse, as well as her mother’s relentless and unachievable expectations, sees in Lenny everything her family is not. He is kind, gentle, and warm. Eunice decides upon her return to the United States that she will move in with Lenny. Lenny is thrilled, and the two quickly begin a relationship. As the months pass, Lenny brings Eunice to meet his parents, who are thrilled not only that Lenny has someone, but has someone who is as responsible and mature as Eunice. When Lenny meets Eunice’s parents, they are not thrilled because Lenny is not Korean, is not rich, and is not attractive.

When Lenny introduces Eunice to his boss, Joshie (who along with Lenny and a few others began Staatling-Wapachung many years before), trouble emerges. Joshie is in his late sixties, but looks as if he is in his twenties thanks to the company’s youth technology. Eunice and Joshie quickly fall for one another and begin seeing each other behind Lenny’s back. Eunice finds in Joshie everything Lenny is not: Joshie is strong and decisive.

At the same time, the frail framework of security in the United States falls apart as the economy ruptures, riots break out across the country, and the government is unable to pay the National Guard Army promised bonuses. Joshie announces that the collapse of the United States is good for business, for foreign investors will be looking for places to spread their influence. The Chinese and the Norwegians become the biggest investors in America, and the company soars.

Ultimately, Joshie breaks the news to Lenny that Eunice has been seeing him behind Lenny’s back. Lenny is crushed, and quickly breaks up with Eunice. Years pass. Lenny writes a book about his experiences during the collapse, consisting of his journal entries, and consisting of messages, e-mails, and instant message conversations from one of Eunice’s social media accounts. The book is a bestseller, but the public attention causes Lenny to change his name and to move to the Free State of Tucson. Eunice breaks up with Joshie and begins to date a Scotsman. Joshie’s youth technology turns out to be harmful rather than helpful to human bodies, and Joshie watches his company dissolve as he awaits death. Lenny, meanwhile, looks forward to growing old among fellow Americans who have no desire to live forever.